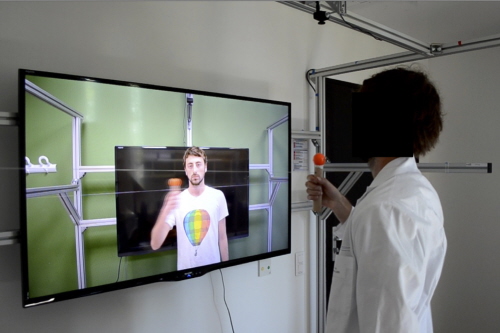 A collaborative research team has found humanoid robotics and computer avatars could help rehabilitate people suffering from social disorders such as schizophrenia or social phobia. It is thanks to the theory of similarity, which suggests that it is easier to interact socially with someone who looks, behaves or moves like us.

Researchers from the University of Bristol, in collaboration with colleagues at the Universities of Exeter, Montpellier and Naples Federico II, have developed a system to enable a robot or computer avatar to interact with a patient whilst playing a version of the mirror game, in which two players try to copy each other’s motion whilst playing with coloured balls that can move horizontally on a string.

The paper, part of the EU-funded AlterEgo project, is published in the Journal of the Royal Society Interface.

Initially the avatar is like an alter ego, created to look and move like the patient to enhance his or her feelings of attachment. Over time the avatar is slowly altered to become less similar, therefore helping with social rehabilitation.

The results show that players sharing similar movement features, or motor signature, interact and co-ordinate better.  This can be used for rehabilitation of patients with serious social disorders as an avatar can be created to act like an alter ego, programmed to look and move like the patient to enhance his or her feelings of attachment.

Mario di Bernardo, Professor of Nonlinear Systems and Control from the Department of Engineering Mathematics at the University of Bristol, said: “It is very challenging to build an avatar that is intelligent enough to synchronise its motion with a human player, but our initial results are very exciting.”

The research used the principles of dynamical systems and feedback control theory to embed the avatar with enough ‘intelligence’ to synchronise and respond to the motion of the human player.

The researchers now wish to build on the technology and set-up multiple human-machine interaction for social rehabilitation and make groups of people and avatars interact with each other to perform joint tasks together.

About the AlterEgo project
The AlterEgo European project aims to develop and test an innovative rehabilitation method to improve such relational deficits, using humanoid robotics and virtual reality. The project will use an avatar (virtual agent) and a humanoid robot (European iCub robot) to manipulate the similarity in real time situations of social interaction between patients and the artificial agent. A new method of rehabilitation will be tested, to improve social interactions in patients suffering from the pathology.