Birds of prey constrained in the beak evolution race 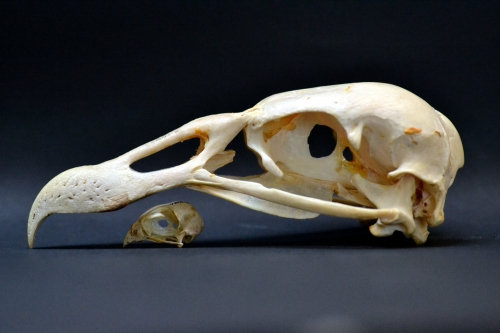 How birds’ beaks evolved characteristic shapes to eat different food is a classic example of evolution by natural selection.

However, new research from the Universities of Bristol, Sheffield, Madrid and York, published today in the journal Proceedings of the National Academy of Sciences, found this does not apply to all species, and that raptors in particular have not enjoyed this evolutionary flexibility.

Lead author of the study, Dr Jen Bright, of the University of Sheffield, said: “Our results show that in birds of prey such as eagles and falcons, the shapes of the skulls change in a predictable way as species increase or decrease in size. The shape of the beak is linked to the shape of the skull, and these birds can’t change one without changing the other.

“We think that being able to break this constraint – letting the beak evolve independently from the braincase, may have been a key factor in enabling the rapid and explosive evolution of the thousands of species of songbirds such as Darwin’s finches and Hawaiian honeycreepers”.

The researchers used a method that allowed them to statistically quantify variation in the shape of predatory bird skulls and see how this shape variation compared with size, what the birds ate and how they are related to each other.

“Our research does not cast doubt on Darwin’s ideas, far from it,” said project lead Professor Emily Rayfield, of the University of Bristol. “Instead it demonstrates how evolution has constrained raptor skulls to a particular range of shapes.”

The team are now keen to extend and test their ideas in other groups of birds. Project lead Dr Sam Cobb, of the University of York said: “Our results are important because they may help us identify one of the driving factors behind the outstanding diversity of bird species we see in the modern world.”

‘The shapes of bird beaks are highly controlled by nondietary factors’ by Jen A. Bright, Jesús Marugán-Lobón, Samuel N. Cobb and Emily J. Rayfield in Proceedings of the National Academy of Sciences.

The study was funded via a grant from the Biotechnology and Biological Sciences Research Council (BBSRC) to Professor Rayfield and Dr Cobb.