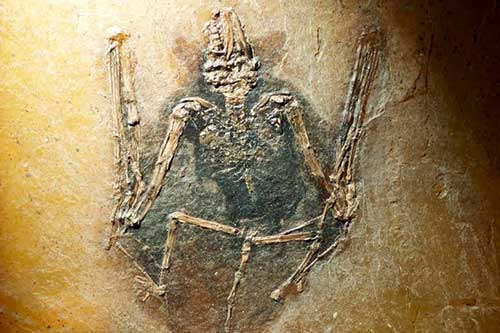 What colour were the animals that roamed the Earth 50 million years ago? For the first time, the original colour of a fossil mammal has been described by scientists from the University of Bristol, UK and Virginia Polytechnic Institute and State University, US.

The researchers combined morphological, experimental and chemical techniques to determine the colour of two species of bat, which lived in the Eocene Epoch, 56-33.9 million years ago.

By studying microscopic spherical and oblong-shaped structures in the fossils, they found that the bats were reddish-brown in colour.  For years, scientists have been divided on whether these structures are melanosomes –organelles (subunits within in cell) that contain melanin and have distinct shapes in modern animals, which can be used to infer colour – or fossilised bacteria, which had eaten away at an animal before it was buried.

In this new study, Bristol-based Dr Jakob Vinther and Masters student Caitlin Colleary, now a PhD student at Virginia Tech, along with researchers from UT Austin and a number of other universities, show that the organic microbodies in the skin, hair, feathers and eyes of exceptionally preserved fossils (ranging in age from the Carboniferous to the Miocene, 300-20 million years ago) contain the remnants of melanin.

In order to identify the origin of these curious structures, the researchers replicated the conditions under which the fossils formed using high pressure, high temperature autoclave experiments.  They showed that the fossils contain fossilised melanin by using Time-of-flight secondary ion mass spectroscopy (TOF-SIMS), which had changed in chemical composition over time.

Dr Vinther, who first described fossil melanosomes and reconstructed the colours of a feathered dinosaur, said: “This is a great leap forward in our understanding of how fossils are preserved.  We now know how melanin is preserved and we have the methods to confidently detect it.”

“This means that the correlation of melanin colour to shape is an ancient invention, which we can use to easily determine colour from fossils by simply looking at the melanosome shape.”

The different types of melanin are also chemically distinct.  By using both lines of evidence, the team was able to determine that the two species of 50-million-year-old bat were both originally a reddish brown colour.

Caitlin Colleary said: “We have now studied tissues from fish, frogs, and tadpoles, hair from mammals, feathers from birds, and ink from octopus and squids.  They all preserve melanin, so it’s safe to say that melanin is all over the place.  Now we can confidently fill in some of the original colour patterns of these ancient animals.”

The study is published today in Proceedings of the National Academy of Sciences (PNAS).