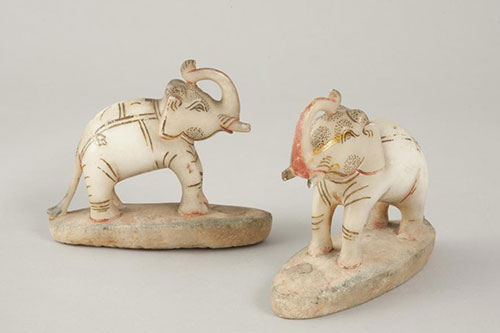 A pair of carved white alabaster figures of elephants in the act of trumpeting or saluting on plinths. Elephants have important astrological significance in Burma, and they were also a part of pre-colonial dynastic systems of status, tribute and regalia. Bristol Museum & Art Gallery

Burma (Myanmar) and its connection with Bristol is the focus of an online exhibition curated by Dr Jonathan Saha of the University of Bristol in collaboration with Bristol Museum & Art Gallery, funded by the Arts and Humanities Research Council (AHRC).

The exhibition buddhasandbirdskins.net highlights artefacts from Burma held by the Museum to show the historical connections between Bristol and Burma, which was colonised by the British during the nineteenth century.

The colony was famous for its teak forests, working elephants, saffron-clad monks and golden pagodas.  As a result, when British people visited, whether for work or for pleasure, they invariably returned home with numerous artefacts packed into their trunks.

These objects ranged from souvenirs produced especially for tourists, to religious artefacts taken from places of worship, to taxidermied animals that had been shot for sport and scientific study.

Dr Saha said: “Burma—or Myanmar, as it is known today—is often thought of in Britain as a remote and isolated country.  This exhibition shows that this was not always the case.

“Over the past century, Bristol Museum’s collections have benefited from bequests made by imperial collectors who travelled in the colony.  Scores of bird-skins, several Buddha statues, and some ostentatious silver tableware are among the numerous items that are today held in its stores.  In this exhibition we have brought together a selection of these objects to remind us of the intertwining of British and Burmese history.”

The online exhibition was put together by Dr Jonathan Saha, working for the Department of Historical Studies at the University of Bristol, in collaboration with Kate Newnham, Senior Curator of Visual Arts, and Bonnie Griffin, Curator of Natural History, both at Bristol Museum & Art Gallery.  The funding for the exhibition was generously provided through an AHRC fellowship, held by Dr Saha, to explore an ‘Animal History of Colonial Burma’.