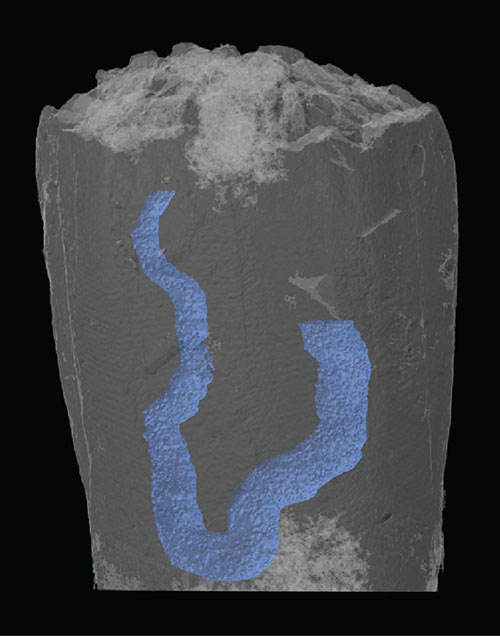 3-D reconstruction of the fossil with the gut shown in blue. The fossil is less than 3 mm in height. I. Rahman

The inner workings of a tiny fossil have been studied using X-ray microscopy, revealing evidence of the digestive system for the first time. Researchers from the University of Bristol, Appalachian State University, the University of Tennessee, Knoxville and the Paul Scherrer Institut analysed the unique fossil specimen using high-energy X-rays at the Swiss Light Source in Switzerland.

The fossil under study is a ‘primitive’ relative of modern sea urchins and starfish and is part of a major group of marine invertebrates called echinoderms.

The results of X-ray imaging prove that the fossil represents an early developmental stage of an extinct group known as blastoids.  It can therefore shed light on the early evolutionary history of echinoderms.

Lead author, Dr Imran Rahman, a palaeontologist in Bristol’s School of Earth Sciences said: “We used a particle accelerator called a synchrotron to image the fossil in 3D.  This allowed us to create a digital reconstruction of its internal anatomy.”

Co-author Dr Johnny Waters, Professor in Invertebrate Paleontology at Appalachian State University, added: “We were very surprised to find evidence of the gut.  Nothing like this has ever been seen in fossils belonging to this group before.”

Dr Colin Sumrall, a co-author and Assistant Professor in Paleobiology at the University of Tennessee, Knoxville, said: “The results have highlighted a number of previously unknown differences between the fossil and its living relatives.  This has forced us to rethink our ideas about how the digestive system evolved in echinoderms.”

Co-author Dr Alberto Astolfo, who helped perform the experiments at the Swiss Light Source, said: “Synchrotron radiation is the state-of-the-art in X-ray imaging.  This study provides further confirmation that palaeontology is one of the most exciting applications for the technique.”

The work was supported by funds from the UK’s Royal Commission for the Exhibition of 1851 and the US National Science Foundation.

The study is published today in the journal Biology Letters.

‘Early post-metamorphic, Carboniferous blastoid reveals the evolution and development of the digestive system in echinoderms’ by Imran A. Rahman, Johnny A. Waters, Colin D. Sumrall and Alberto Astolfo in Biology Letters