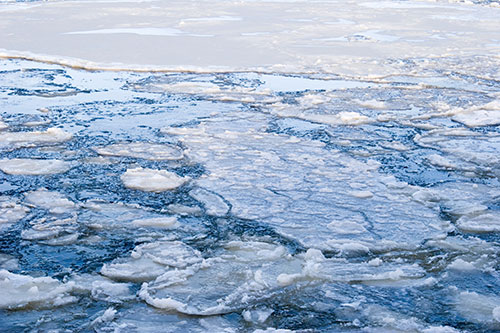 The probability of extreme climate events (such as ice sheet collapse) increases with increasing uncertainty, all other factors being equal, the study finds

Uncertainty about climate change can, counter-intuitively, produce actionable knowledge and thus should provide an impetus, rather than a hindrance, to addressing climate change, researchers from the University of Bristol’s Cabot Institute argue in a special issue of the Royal Society’s Philosophical Transactions A, published this week.

Responding and adapting to climate change: Uncertainty as knowledge, edited by Professors Stephan Lewandowsky and Rich Pancost of Bristol’s Cabot Institute with Dr Timothy Ballard of the University of Queensland, illustrates that, rather than being an argument for delaying mitigative action, uncertainty provides an impetus to be concerned about climate change because greater uncertainty increases the risks associated with climate change.

Professor Pancost said: “Uncertainty plays a pivotal role in public debate, and arguments against mitigation are frequently couched in terms of uncertainty.  Such arguments often draw attention to the possibility that because an issue is uncertain, it may be less serious than anticipated.

“In fact, in many instances – including climate change – the reverse is true: mathematical analyses of the risk associated with climate change have revealed that as uncertainty increases, so almost always does risk.  Similarly, potential surprises are more likely to be calamitous than benign, because the probability of extreme climate events (such as ice sheet collapse) increases with increasing uncertainty, all other factors being equal.

“The presence of scientific uncertainty doesn’t just reveal a lack of knowledge but is, in many cases, a mathematical expression of the knowledge we do have.  Uncertainty can therefore be a source of actionable knowledge rather than an indicator of ignorance.”

The authors also argue that, because focussing on uncertainties can discourage action and distract people from decision-making, the debate about uncertainty should be reframed.

Professor Lewandowsky said: “Climate projections typically express uncertainty in the outcome itself, but not in the outcome’s time of arrival – for example, projections reported by the IPCC generally imply statements along the lines of ‘by year X, average global surface temperature will rise by between Y1 and Y2 degrees’.

“Reporting projections in this manner invites wishful thinking because it increases the perceived variance in the outcome.  Reframing this projection so that the uncertainty is expressed in the time of arrival can reduce the potential for wishful thinking because saying ‘average global surface temperature will definitely rise by Y degrees, and this will occur between years X1 and X2’ emphasizes the when rather than the if.

“Our research shows that when uncertainty is expressed in this manner, people perceive the consequences of climate change to be more serious and show greater endorsement of mitigative action.”

‘Uncertainty as knowledge by Stephan Lewandowsky, Timothy Ballard and Richard D. Pancost in Philosophical Transactions A

About the special issue

Responding and adapting to climate change: Uncertainty as knowledge includes contributions from climate science, cognitive science, psychology, and allied disciplines in the social and physical sciences.  It seeks to find ways to bridge the disparity between scientists and the general public in the conceptualization of uncertainty.