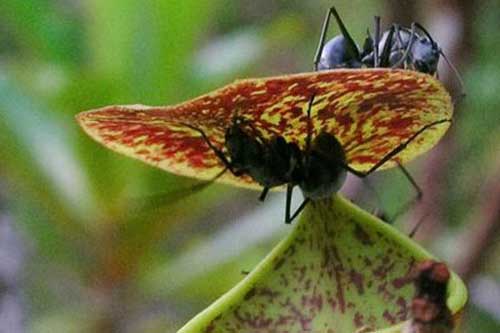 The traps of the carnivorous pitcher plant Nepenthes gracilis use heavy rain as a power source to drive a fast prey capture motion, new research from the University of Bristol has found. The findings are published today in the journal PNAS.

All plants can move, but most of their movements are too slow to be observed without time-lapse photography. Sunflowers turn their heads to follow the path of the sun. Pot plants on a window sill turn their leaves towards the light. Tiny pores on the leaves constantly open and close to allow plants to breathe. Some plant movements, however, are spectacularly fast. The snap traps of the Venus flytrap close on unsuspecting insects in a fraction of a second. Other plants have catapult mechanisms that shoot seeds, spores or pollen into the air, which, in extreme cases, are launched at nearly half the speed of sound.

Both flytraps and catapult mechanisms need energy to power the movements, much like we need to fuel our muscle movements. The pitcher plant, however, has found a way to exploit the energy of falling rain drops to drive its trapping movement. In other words, it gets the movement for free. The newly discovered pitcher plant movement is also an order of magnitude faster than the snapping flytrap – too fast to be observed with the naked eye.

Using a combination of high speed cameras and sensitive laser equipment Dr Ulrike Bauer and colleagues from the University of Bristol found that rain helps the plant to ‘flick’ ants into the pitcher trap, where they subsequently drown and are consumed by the plant. At the top of each pitcher is a roof-like ‘lid’ attached to a flexible hinge. When rain drops impact, the whole lid pivots up and down like a springboard, flinging the ants into the pitcher. The peak velocities of this motion are similar to the take-off speed of a jumping locust.

The lid also has an anti-adhesive wax coating which reduces the grip of insects. The scientists tethered individual ants to a highly sensitive force transducer to measure their grip strength on the lid surface. The results show that the surface is just slippery enough to dislodge ants when the lid vibrates, but it is slip-proof enough to allow them to hold on under ‘calm’ conditions.

The study demonstrates a new category of plant movement that takes advantage of an external energy source. “We used to think of carnivorous plant traps as either ‘active’, movement-employing, or ‘passive’, motionless traps”, Dr Bauer said. “Now there is a trap that moves quickly but passively. It does not fit in with the conventional categories.”