Transmission of torque at small scales: the nanoclutch 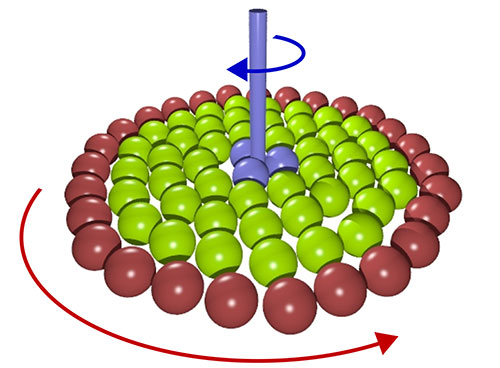 Principle of operation of the ‘nanoclutch’: red spheres rotate clockwise and an opposing torque is applied to a central axle

A model microscopic system to demonstrate the transmission of torque in the presence of thermal fluctuations – necessary for the creation of a tiny ’clutch’ operating at the nanoscale – has been assembled at the University of Bristol as part of an international collaboration.

When driving a car, the clutch mechanically carries the torque produced by the engine to the chassis of the vehicle – a coupling that has long been tested and optimized in such macroscopic machines, giving us highly efficient engines.  For microscopic machines, however, developing a clutch which would operate at the nanoscale is much more challenging because, at microscopic length scales, different physics need to be considered.  Thermal fluctuations play an increasingly dominant role as a device is miniaturised, leading to increased dissipation of energy and the need to develop new design principles.

In the model microscopic system developed by scientists from Bristol, Düsseldorf, Mainz, Princeton and Santa Barbara, a ring of colloidal particles are localised in optical tweezers and automatically translated on a circular path, transferring a rotational motion to an assembly of identical colloids confined to the interior region.

Dr Paddy Royall of the University of Bristol said: “This device looks a lot like a washing machine, but the dimensions are tiny.  Through optical manipulation the particle ring can be squeezed at will, altering the coupling between the driven and loaded parts of the assembly and providing a clutch-like operation mode.”

Colloidal suspensions fall into the category of materials known as ‘soft matter’, and the softness of the rotational device is shown to lead to new transmission phenomena not observed in macroscopic machines.  “Exploiting the softness of nanomaterials gives us additional and unprecedented control mechanisms which may be employed when designing microscopic machines,” Dr Royall explained.

In addition to the experiments performed at the University of Bristol, physicists at the University of Düsseldorf have developed model computer simulations to further investigate torque coupling at the nanoscale.  This enables the measurement of nanomachine efficiency, which is small but can be optimised through careful control of the system parameters.

The researchers have identified three different transmission regimes: a solid-like scenario which transmits torque much like a macroscopic gear; a liquid-like scenario in which much of the energy input is lost to friction and an intermediate slipping scenario unique to soft materials which combines aspects of the solid-like and liquid-like behaviours.

“A basic understanding of the coupling process will give us insight into the construction of nanomachines, in which torque transfer is absolutely essential,” said Professor Hartmut Loewen of the University of Düsseldorf.

The research is published in Nature Physics.