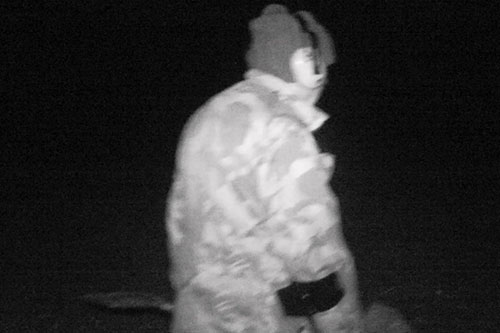 An investigation by the BBC Inside Out West Programme and the University of Bristol has uncovered the scale of heritage crime through the activities of illegal metal detectorists in Gloucestershire.

The area is well known for its many important archaeological sites, and the majority of these are protected by law as ancient monuments.  This has not, however, deterred treasure hunters trespassing onto these sites, often at night, to dig for buried artefacts and to keep whatever they find.  Up to now, there have been very few methods to catch these individuals, often known as ‘nighthawks’, and prosecute them.

The investigation placed motion-sensor infra-red cameras at a number of locations around a well-known destination for nighthawks.

“We were amazed to catch several individuals working over a scheduled ancient monument digging holes with their detectors,” said Professor Mark Horton of Bristol’s Department of Archaeology and Anthropology. “The fact that they were there between 10.30pm and 2am clearly shows that they did not want to be discovered.”

Archaeologists are not opposed to legitimate metal-detecting, where it takes place with the permission of the landowner, on unprotected sites, and encourages detectorists to declare their finds to the Portable Antiquities Scheme, which maintains a publicly available data base.  However, increasingly there has been a threat from illegal treasure hunters who target the richest sites in the hope that they may make their fortune.

“This heritage belongs to everyone, and these people are stealing from society for their own private benefit,” commented Professor Horton.

This week the sentencing guidelines for judges and magistrates have been strengthened to include stiffer penalties for heritage crime.

Inside Out West will be broadcast on Monday 12 October at 7.30pm on BBC ONE.