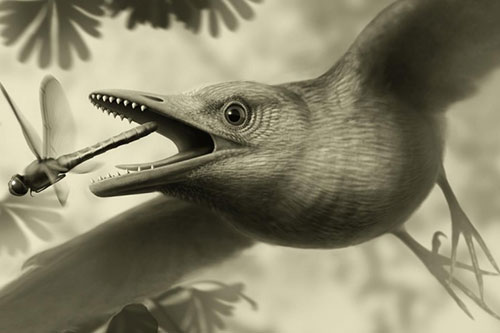 A reconstruction of how the bird might have looked, based on current evidence Stephanie Abramowicz, scientific illustrator at the Natural History Museum, Los Angeles County 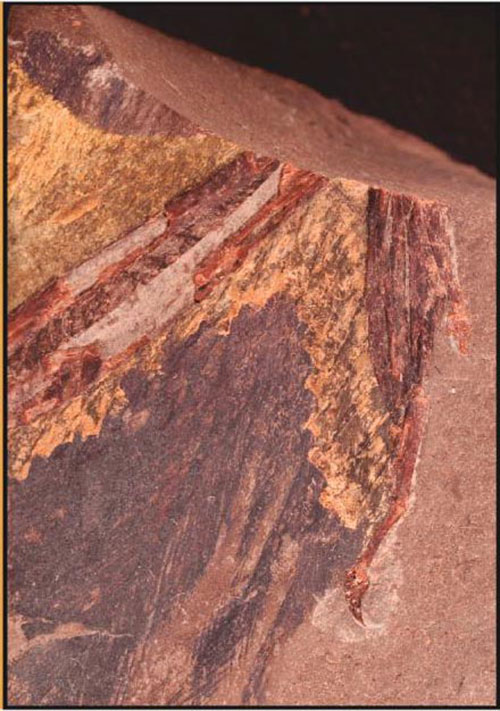 Original photography of the specimen described in Scientific Reports

Some of the most ancient birds were capable of performing aerodynamic feats in a manner similar to many living birds, according to a new study of the fossil wing of a primitive bird, led by a PhD student at the University of Bristol.

Birds have an enormously long evolutionary history: the earliest of them, the famed Archaeopteryx, lived 150 million years ago in what is now southern Germany.  However, whether these early birds were capable of flying and, if so, how well has remained shrouded in scientific controversy.

This new fossil preserves not only the articulated bones of the forelimb but also abundant remains of the plumage and of the soft-tissues of the wing.

Specifically, it documents, for the first time, an intricate arrangement of fibres which matches anatomically with a complex network of ligaments, muscles and tendons present in modern-day birds.  This network ensures the position and controls the fine adjustments of the wing’s main feathers, allowing living birds to fly efficiently and master the sky.

The presence of these structures in the wing of such a primitive bird supports the notion that at least some of the most ancient birds were capable of performing aerodynamic feats in a fashion similar to those of many living birds.

Lead author of the study, Guillermo Navalón, a PhD student in Bristol’s School of Earth Sciences, said: “It’s very surprising that despite being skeletally quite different from their modern counterparts, these primitive birds show striking similarities in their soft anatomy.”

“The anatomical match between the fibres preserved in the fossil and those that characterize the wings of living birds strongly indicates that some of the earliest birds were capable of aerodynamic prowess like many present-day birds,” said Dr Luis Chiappe, Director of the Dinosaur Institute, NHM, Los Angeles County.

Ancient birds may have flown over the heads of dinosaurs but some aspects of the precise flight modes of these early fliers still remain unclear.

Co-author of the study, Dr Jesús Marugán Lobón from Universidad Autónoma in Madrid said: “Fossils such as this are an open window to deep time and allow scientists access to the most intricate aspects of the early evolution of the flight of birds.”

Other members of the research team include Dr José Luis Sanz and Dr  Ángela D. Buscalioni, both from Universidad Autónoma in Madrid.