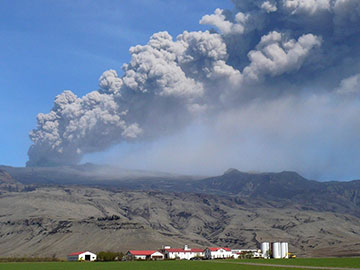 The University of Bristol has been awarded the Queen’s Anniversary Prize for Higher Education – the highest accolade for any academic institution – in recognition of its world-leading research in volcanology.

The work of Bristol’s Volcanology Research Group has been applied across the globe to reduce a variety of risks posed by active volcanism.  This includes:

The announcement was made tonight [Thursday 19 November] at a reception at St James’s Palace, which was attended by Professor Hugh Brady, Vice-Chancellor and President of the University of Bristol and Dr Matt Watson, Reader in Natural Hazards in the School of Earth Sciences.

Professor Brady said: “The University is delighted to receive such a prestigious award which recognises the deep and far-reaching impact of research carried out by Bristol scientists.

“The work of our volcanology research group has had real and lasting impacts throughout the world, making people’s lives safer, contributing to more resilient societies, ensuring safer international travel and protecting essential infrastructure.”

Professor Katharine Cashman, head of the Volcanology Research Group said: “This is a real honour not only for the volcanology group, but also for all of our colleagues at the University of Bristol, in the UK and in the international community, who are committed to working together to improve our resilience to volcanic hazards around the world.”

The Queen will present the prestigious accolade, which is part of the UK’s national Honours system, to the University during a ceremony at Buckingham Palace next year.

In this 11th round of the prestigious awards, 21 UK universities and colleges were awarded Prizes recognizing a wide range of innovative work across many different disciplines.

Jo Johnson, Minister for Universities and Science said: “The UK is a world leader in science and research and The Queen’s Anniversary Prizes celebrate the achievements of our universities and colleges.  The outstanding academics recognised with these awards bring benefits to the everyday lives of millions of people in the UK and deserve this high honour for their work.”

The Queen’s Anniversary Prizes are awarded every two years to universities and colleges who submit work judged to show excellence, innovation, impact and benefit for the institution itself and for people and society generally in the wider world.  Established in 1993, they are organised by the Royal Anniversary Trust.