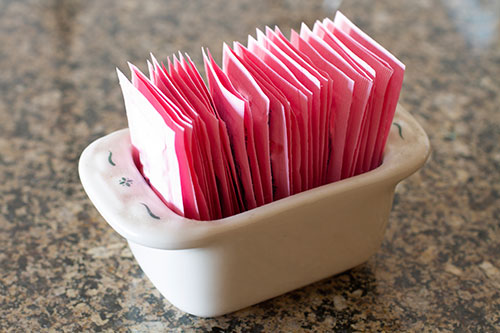 Use of low energy sweeteners (LES) in place of sugar, in children and adults, leads to reduced calorie intake and body weight – and possibly also when comparing LES beverages to water – according to a review led by researchers at the University of Bristol published in the International Journal of Obesity today.

For the first time, all available science was integrated into a single review to evaluate the real impact of LES, such as saccharin, aspartame, sucralose and stevia, on energy intake (EI) and body weight (BW) over the short- and long-term.  A considerable weight of evidence confirmed that consuming LES instead of sugar helps reduce relative energy intake and body weight.

Lead author Professor Peter Rogers from the University of Bristol said: “We believe that we should shift the question from whether LES are ‘good’ or ‘bad,’ and rather focus on how they should be best used in practice to help in the achievement of specific public health goals, such as the reduction of intakes of free sugars and energy.”

Managing energy balance (that is, energy intake vs. energy expenditure) well results in a steady body weight.  On the contrary, eating an excessive amount of food causes an increase in body weight as this extra energy is stored in the body as adipose tissue (fat).  Low energy sweeteners were developed for consumers looking for ways to reduce their sugar and energy intake.

The comparison between LES beverages and water is important because it shows that LES do not increase appetite.  If anything, the evidence suggests that LES beverages reduced weight more than water.  One reason for this may be that switching from sugar-sweetened drinks to those with LES may be an easier and more acceptable dietary change to make than switching to water.

‘Does low-energy sweetener consumption affect energy intake and body weight? A systematic review, including meta-analyses, of the evidence from human and animal studies’ by Rogers et al in the International Journal of Obesity

Co-authors Rachel Perry and Professor Andy Ness of the NIHR Biomedical Research Unit in Nutrition, Diet and Lifestyle at the University Hospitals Bristol NHS Foundation Trust and the University of Bristol were funded by the National Institute for Health Research (NIHR), the research arm of the NHS.

What makes this new or different?

For the first time, the totality of evidence on the question of low energy sweeteners’ effects on energy intake and body weight has been considered in a systematic review, including both human and animal research.

What is a ‘systematic’ review and why is that important?

In a systematic review, researchers identify all relevant scientific papers that address a question. It is a way to overcome possible bias (for example, from selecting or ignoring certain evidence), and ensure the totality of relevant evidence is considered. A systematic review is also transparent and open to direct replication by other experts.

Some low energy sweeteners are derived from natural sources, but the majority are manufactured, so they are often called ‘artificial’ sweeteners.

Why do some people say that low energy sweeteners might cause weight gain?

What about the safety of low energy sweeteners?

This paper did not evaluate safety. The low energy sweeteners used in commercial foods and beverages have all undergone safety evaluations needed to achieve regulatory approval for use by the general public.

Why do you say that low energy sweeteners are beneficial, “possibly even also when compared to water”?

This comes from intervention studies showing that people tended to lose more weight when they consumed low-energy sweetened (‘diet’) drinks rather than water.

Does this mean using low energy sweeteners will cause weight loss?

No. Weight change is dependent on the total diet and activity pattern, not a single component of foods and beverages. However, using low energy sweeteners is a helpful alternative to caloric sweeteners, to reduce the risk of weight gain or as part of weight loss.

What was the role of the food industry in this paper?

Of the 11 authors, two are research scientists in the food industry, eight are independent academics, including four full professors recognized as international authorities in the areas of eating behaviour and nutritional epidemiology.

The National Institute for Health Research (NIHR) is funded by the Department of Health to improve the health and wealth of the nation through research. Since its establishment in April 2006, the NIHR has transformed research in the NHS. It has increased the volume of applied health research for the benefit of patients and the public, driven faster translation of basic science discoveries into tangible benefits for patients and the economy, and developed and supported the people who conduct and contribute to applied health research. The NIHR plays a key role in the Government’s strategy for economic growth, attracting investment by the life-sciences industries through its world-class infrastructure for health research. Together, the NIHR people, programmes, centres of excellence and systems represent the most integrated health research system in the world.