In a spin: acrobatic feats of praying mantises revealed 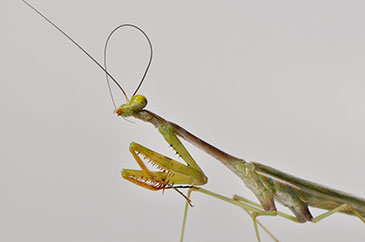 The jump of a praying mantis lasts less than a tenth of second from take-off to landing. Professor Malcolm Burrows, University of Cambridge

To watch a young, wingless praying mantis jump is a remarkable thing. The jump from take-off to landing lasts less than a tenth of second – faster than the blink of a human eye. During a jump, the insect’s body rotates in mid-air at a rate of about 2.5 times per second and yet, according to new research from the Universities of Bristol and Cambridge, when mantises jump, they land on target every time.

“This is akin to asking an ice skater who is rotating at the same speed as these mantises to stop suddenly and accurately to face a specific direction,” said Professor Malcolm Burrows of the University of Cambridge.

Professor Burrows, along with Dr Gregory Sutton of the University of Bristol, came to study praying mantises by accident.  After buying a few mantises at an amateur entomology show, the researchers brought them back to the lab, the insects started breeding and the researchers became intrigued by the mantises’ jumping behaviour.

Dr Sutton said: “We could not scare them into jumping or get them to jump away from a threatening stimulus.  So instead we offered them a target to jump towards and found that they would do this consistently and accurately.”

So, how do they do it?  To find out, the researchers watched high-speed video after video – 381 in all – of 58 young mantises jumping to a thin black rod.  The researchers saw that, in preparation for a jump, first the insects sway their heads sideways, scanning for their targets, then they rock their bodies backward and curl their abdomens up, tip pointed forward.

With a push from their legs, the mantises’ bodies launch into the air, spinning in controlled fashion.  The insects rotate three distinct body parts—the abdomen, front legs, and hind legs—independently and in a complex sequence.  As the mantises sail through the air, the spin is transferred from one body segment to the next, keeping the whole body level and right on target.

“Maintaining stability so that the body does not rotate uncontrollably in mid-air is a difficult task,” Professor Burrows said. “When the movement is rapid, as it is in a jump, and you don’t have wings, then the task is even more difficult.  Nevertheless, a praying mantis moves rapidly and controls the rotation of its body so that it lines up precisely with a target, and does all of this in less than 100 milliseconds (a tenth of a second).”

This kind of jumping control is rather unusual in the insect world.  Most insects lose all control once their legs leave the ground, the researchers say, spinning in unpredictable directions with frequent crash landings.

The young mantises’ newfound skill might have applications for tiny robots. And there is plenty more to learn about the insects themselves too.