When should blood transfusions be given after cardiac surgery? 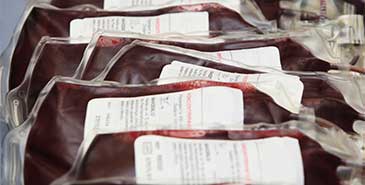 New research led by the University of Bristol has shown that patients having heart surgery do not benefit if doctors wait until a patient has become substantially anaemic before giving a blood transfusion.

Cardiac surgery patients who receive blood transfusions are believed to have more complications such as infections, heart attacks and strokes, and this has led to speculation that avoidance of transfusion will improve clinical outcomes.

To resolve this issue doctors and researchers from the universities of Bristol and Oxford conducted a randomised controlled trial to compare policies of transfusing cardiac surgery patients at a ‘low’ or ‘high’ haemoglobin level. The aim of the study was to determine whether transfusing at a low level was safer, or more cost-effective, as has been shown in other patient groups.

Patients over 16 years of age undergoing non-emergency cardiac surgery were recruited to the clinical trial at 17 UK hospitals. Participants with a haemoglobin (Hb) level of less than 9 g/dL after their operations were randomised to have a transfusion either when they became substantially anaemic (transfuse when Hb is ‘low,’ i.e. less than 7.5 g/dL) or straightaway, when they were mildly anaemic (transfuse when Hb is ‘high,’ i.e. less than 9 g/dL).

To compare the two transfusion strategies the research team counted the number of patients who had a serious infection, stroke, heart attack, dead gut or kidney failure during the first three months after the operation.  The trial analysed information for 2,003 participants, about four times more than the next largest similar trial of low and high thresholds for transfusion in patients having heart surgery.

There were no substantial differences between the ‘high’ and ‘low’ groups with respect to other information measured to assess recovery but some of the other findings in the trial showed a trend in the same direction.  Health care costs up to three months after surgery were similar in the ‘high’ and ‘low’ groups.  Based on the overall pattern of findings, the researchers propose a new theory that a ‘high’ or liberal threshold is better after cardiac surgery.  This challenges most prevailing guidelines and current health policy.

Barnaby Reeves, Professorial Research Fellow in Health Services Research in the School of Clinical Sciences at the University of Bristol and corresponding author on the paper, said: “Although only a hypothesis, the suggestion that it might be better rather than worse to transfuse patients who are only mildly anaemic goes against the evidence about when to transfuse in non-cardiac surgery settings.

“Transfusing more rather than fewer patients would create a challenge for hospitals.  With an ageing population and possibly an increase in heart disease, obesity and diabetes, it can only become more difficult in the future to maintain the national blood supply in the UK and in other developed countries around the world. Our findings emphasise the importance of interventions to reduce blood loss in the first place.”

Gavin Murphy, British Heart Foundation (BHF) Professor of Cardiac Surgery, formerly of Bristol’s School of Clinical Sciences and now at the University of Leicester, who led the trial, added: “Existing national and international transfusion guidelines recommend that blood transfusions only be given to patients who develop very low haemoglobin concentrations. We have shown that this strategy may increase the number of deaths in cardiac surgery.

Sarah Wordsworth, Associate Professor of Health Economics in the Nuffield Department of Population Health at the University of Oxford, said “Even though the ‘high’ group were given more blood, it was interesting that this did not lead to them costing more once the costs of treating complications were added to the analysis.”

Professor Peter Weissberg, Medical Director at the British Heart Foundation (BHF), commented: “Donated blood is a precious commodity and needs to be used safely and effectively. While emergency blood transfusions are life-saving in patients who are bleeding heavily, it is unclear whether ‘topping up’ blood levels in patients with reduced blood counts after major surgery is beneficial. Indeed, some previous studies have suggested it may be harmful.

“This research did not show that topping up patients with modestly low blood counts was harmful. The results showed that it may actually reduce deaths in the weeks following surgery, although more research is needed to determine if this was a direct consequence of their transfusion or something else. Patients undergoing heart surgery in the UK can be reassured that they have a very good outcome regardless of the transfusion policy of their surgical unit.”

The trial was funded by a grant awarded to the University of Bristol by the National Institute for Health Research Health Technology Assessment (NIHR HTA) Programme (ref: 06/402/94).

The economic evaluation for the trial was carried out by Dr Sarah Wordsworth and Elizabeth Stokes from the University of Oxford’s Health Economics Research Centre (HERC) in the Nuffield Department of Population Health.

Barnaby Reeves, Professorial Research Fellow in Health Services Research in the School of Clinical Sciences, is part-funded by the NIHR Bristol Biomedical Research Unit in Cardiovascular Disease and this award also supported the research nurse team in Bristol.

Background information about transfusion
The benefits of red cell blood transfusions for managing life-threatening bleeding are clear but this situation only applies to a minority of patients undergoing surgery.  In fact, the severity of anaemia (low red cell count or haemoglobin concentration) is usually (for about 80 per cent of patients) the information that guides doctors to transfuse a patient or not.

However, severe anaemia represents a specific risk to patients with heart disease and there is uncertainty as to whether the findings of this previous research should apply to cardiac surgery patients. This uncertainty is reflected by wide variations in clinical practice, with transfusion rates varying from 25 per cent to 75 per cent of patients between centres in the UK.

About the NIHR HTA
The National Institute for Health Research Health Technology Assessment (NIHR HTA) Programme funds research about the effectiveness, costs, and broader impact of health technologies for those who use, manage and provide care in the NHS. It is the largest NIHR programme and publishes the results of its research in the Health Technology Assessment journal, with over 700 issues published to date. The journal’s 2013 Impact Factor (5.116) ranked it two out of 85 publications in the Health Care Sciences and Services category. All issues are available for download, free of charge, from the website. The HTA Programme is funded by the NIHR, with contributions from the CSO in Scotland, NISCHR in Wales, and the HSC R&D Division, Public Health Agency in Northern Ireland.

About the NIHR
The National Institute for Health Research (NIHR) is funded by the Department of Health to improve the health and wealth of the nation through research. Since its establishment in April 2006, the NIHR has transformed research in the NHS. It has increased the volume of applied health research for the benefit of patients and the public, driven faster translation of basic science discoveries into tangible benefits for patients and the economy, and developed and supported the people who conduct and contribute to applied health research. The NIHR plays a key role in the Government’s strategy for economic growth, attracting investment by the life-sciences industries through its world-class infrastructure for health research. Together, the NIHR people, programmes, centres of excellence and systems represent the most integrated health research system in the world.