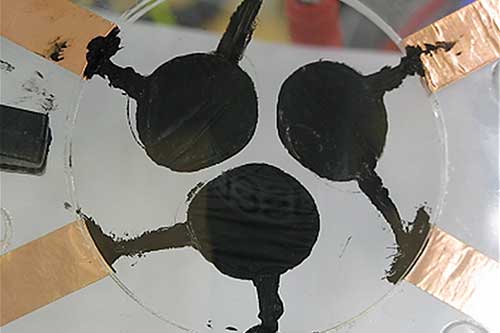 Researchers from the University of Bristol have shown it is possible to create artificial skin that can be transformed at the flick of a switch to mimic one of nature’s masters of camouflage, the squid.

The research team, from the University’s Department of Engineering Mathematics, have designed a smart materials system, inspired by biological chromatophores, which creates patterns that change and morph over time and mimic biological patterning.

The paper, published in the Journal of the Royal Society Interface, describes the design, mathematical modelling, simulation and analysis of a dynamic biomimetic pattern generation system.

The researchers have shown the artificial skin, made from electroactive dielectric elastomer, a soft, compliant smart material, can effectively copy the action of biological chromatophores.  Chromatophores are small pigmented cells embedded on cephalopods skin which can expand and contract and that work together to change skin colour and texture.

The system achieves the dynamic pattern generation by using simple local rules in the artificial chromatophore cells, so that they can sense their surroundings and manipulate their change. By modelling sets of artificial chromatophores in linear arrays of cells, the researchers explored whether the system was capable of producing a variety of patterns.

The researchers found that it is possible to mimic complex dynamic patterning seen in real cephalopods such as the Passing Cloud display, which is when bands of colour spread as waves across the skin. This visual effect acts to distract and divert predators.

Aaron Fishman, Visiting Fellow in Engineering Mathematics, said: “Our ultimate goal is to create artificial skin that can mimic fast acting active camouflage and be used for smart clothing such as cloaking suits and dynamic illuminated clothing.

“The cloaking suit could be used to blend into a variety of environments, such as in the wild.  It could also be used for signalling purposes, for example search and rescue operations when people who are in danger need to stand out.”

The researchers investigated making bio-inspired artificial skin embedded with artificial chromatophores using thin sheets (five to ten millimetre) of dielectric elastomer - a soft, rubbery material that can be electrically controlled to be compliant.

In the future the team will consider changing the system to improve propagation control and to generate new patterns using other local rules.  They will also carry out a more extensive analysis of the different pattern types that can be achieved under alternative system parameters, as well as developing the model to simulate patterns in two-dimensional array systems. The researchers expect this could produce more patterns, which could resemble those in the natural world.

‘Hiding the squid: patterns in artificial cephalodpod skin’ by Aaron Fishman, Jonathan Rossiter and Martin Homer in Journal of the Royal Society Interface.