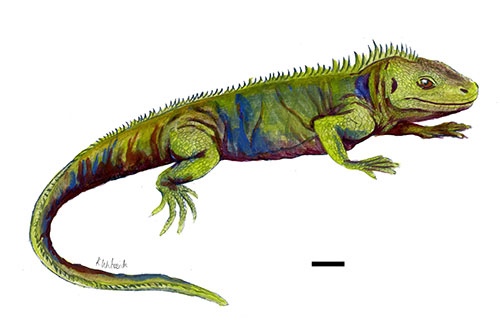 A reconstruction of what Clevosaurus sectumsemper may have looked like. The scale bar denotes 1cm. C. sectumsemper is the smallest clevosaur species ever described. © Katharine Whiteside

Fossils found in a quarry in Gloucestershire have been identified by a student and her supervisors at the University of Bristol as a new small species of reptile with self-sharpening blade-like teeth that lived 205 million years ago. Part of the name chosen for the new species – Clevosaurus sectumsemper – takes inspiration from a spell cast in the Harry Potter books.

Research by Catherine Klein, an undergraduate in Bristol’s School of Earth Sciences, shows that fossils from the previously unstudied Woodleaze Quarry belong to a new species of the ‘Gloucester lizard’ Clevosaurus (named in 1939 after Clevum, the Latin name for Gloucester).

In the Late Triassic, the hills of the South West of the UK formed an archipelago that was inhabited by small dinosaurs and relatives of the Tuatara, a living fossil from New Zealand.  The limestone quarries of the region have many caves or fissures containing sediments filled with the bones of abundant small reptile species that give us a unique insight into the animals that scuttled at the feet of the dinosaurs.  The fissures are of worldwide importance in yielding such well- preserved small reptiles.

Catherine Klein, who completed the research as part of a summer project, said: “The new species, Clevosaurus sectumsemper, probably lived near the edge of one of the ancient archipelago’s islands, in a relatively hostile environment.  This would explain why nearly all the bones come from one species, and why there is a relatively high occurrence of healed fractures such as one we found in a rib.  Possibly the animals were fighting each other due to a limited food source or perhaps they preyed on each other and bones were broken, but some individuals survived and their broken bones healed.”

Like some other clevosaurs, which were found throughout the ancient world, the new species has a self-sharpening dentition: with each bite the teeth are sharpened as they cut past each other very precisely.  As a result, old individuals are left with sharp ridges of bone which they use as a cutting surface.

“The species name sectumsemper means ‘always cut’, and was chosen to reflect this,” said Catherine. “It is also a nod to the Harry Potter character Severus Snape, who made a spell called sectumsempra (perhaps meaning sever forever).”

“There were enough differences, particularly in the jaws, to allocate the material to a new species,” said Professor Mike Benton, one of Catherine’s supervisors.

Another supervisor, Dr David Whiteside, added that the new reptile has a specially adapted dentition that allows it to tackle much larger food than would usually be expected for such a small animal, the smallest of the clevosaurs.

Woodleaze Quarry lies 800m to the south of Tytherington Quarry which produced bones of the Bristol dinosaur Thecodontosaurus.

Dr Whiteside, who originally described the Tytherington fauna, said: “It is remarkable from an ancient geography point of view because we have evidence of a gradual decline in species richness from the northern Tytherington fissures to the almost complete dominance of Clevosaurus sectumsemper in the fauna of Woodleaze in the south as the edge of the ancient island is reached.  Perhaps we are documenting the details of geographic distribution at the time.”

Catherine, Dr Whiteside and Professor Benton wish to especially thank Hanson Aggregates Ltd. for access and assistance in fieldwork in their quarries.

‘A distinctive Late Triassic microvertebrate fissure fauna and a new species of Clevosaurus (Lepidosauria: Rhynchocephalia) from Woodleaze Quarry, Gloucestershire, UK’ by Klein et al., in Proceedings of the Geologists’ Association