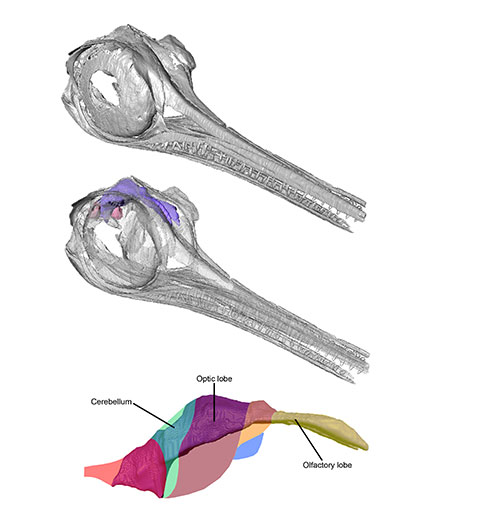 The world’s first study into the brain anatomy of an ichthyosaur, a marine reptile that lived at the same time as the dinosaurs, has shed light on how the reptilian brain adapted to life in the oceans. The work, led by University of Bristol undergraduate Ryan Marek, is out this week in the journal Palaeontology.

With strong ties to Mary Anning, the renowned nineteenth century fossil collector, ichthyosaurs are ingrained within the history of palaeontological research, having first been discovered over 200 years ago.  Despite this, research into these ancient marine reptiles is difficult as their fossilised remains are usually found compressed and flattened, making studies of skull function and brain anatomy near impossible.

However, one specimen from the Bath Royal Literary and Scientific Institute, originally found locally at a site now lost to science in Strawberry Bank, Somerset, is almost complete, and is preserved spectacularly in three dimensions.

Ryan Marek, lead author on the paper said: “The fossil is incredible – its skull is in a good enough condition to use the latest visualisation techniques, allowing us to carry out work that’s never been done on ichthyosaurs before.”

Ichthyosaurs were a group of marine reptiles closely related to plesiosaurs and pliosaurs, all of which are found on various British coastlines on a semi-regular basis.  They superficially resemble dolphins, however ichthyosaurs have much larger eyes, used to see when diving to depths of up to 600 metres, and longer, thinner snouts.

Using CT scanning and digital visualisation software, the researchers were able to fully restore the skull of the ichthyosaur, which was assigned to the species Hauffiopteryx typicus that lived 180 million years ago.  Then, by infilling the cavity in the skull which the brain used to occupy, the researchers, for the first time ever, were able to study the brain anatomy of an ichthyosaur.

The study found enlarged optic lobes, which correspond to the specimen’s huge eyes and allows it to see when diving to deeper waters.  The ichthyosaur also had an enlarged cerebellum, the part of the brain responsible for motor control, enabling it to be a highly mobile, visual predator. Unexpectedly, the olfactory region, the area responsible for processing smell, is enlarged.

Co-author Professor Mike Benton said: “These results both confirm previous hypotheses on ichthyosaur sensory biology and also offer new insights into how these marine reptiles interacted with their environments – perhaps the creatures relied more on their sense of smell than we previously thought.”

Another co-author, Benjamin Moon said: “Identifying these features allows us to better understand the evolutionary relationships of ichthyosaurs, and how the group evolved, and this study will hopefully encourage others to research other ichthyosaur specimens with the latest techniques.”

‘The skull and endocranium of a lower Jurassic ichthyosaur based on digital reconstructions’ by Ryan D. Marek, Benjamin C. Moon, Matt Williams and Michael J. Benton in Palaeontology