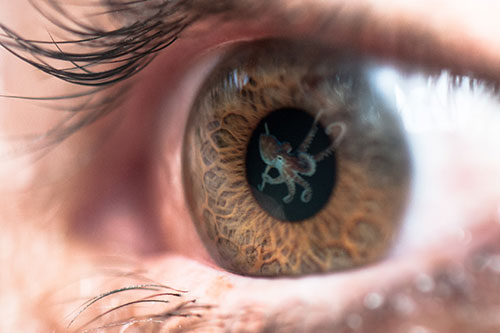 An experiment originally designed to test the visual abilities of octopuses and cuttlefish has given University of Bristol researchers an unprecedented insight into the human ability to perceive polarized light – the supersense that most of us don’t even know we have.

We are all familiar with colour and brightness, but there is a third property of light, the ‘polarization’, which tells us the orientation in which the light waves are oscillating.

Dr Shelby Temple, a Research Associate from the Ecology of Vision Group in Bristol’s School of Biological Sciences and one of the study’s lead authors said: “Imagine a skipping rope represents a light wave travelling through space.  If you move the rope from side to side, the wave you make is horizontally polarized.  If you shake the rope up and down you create a vertically polarized wave. Generally, light is a mixture of polarizations, but sometimes – for example in parts of the sky, on your computer screen and in reflections from water or glass – a large percentage of the waves are oscillating in the same orientation and the light is strongly polarized.”

Animals, like bees and ants, use polarization patterns in the sky as a navigation aid.  But few, even in the scientific community, are aware that humans can perceive the polarization of light with the naked eye too.  We do so using ‘Haidinger’s brushes’, a subtle visual effect, which appears like a yellow bow tie at right angles to the polarization angle.

In the present study, the researchers developed special filters to vary the percentage of polarized light from 0 to 100 per cent and tested the minimum percentage polarization at which Haidinger’s brushes could be detected.  Among 24 people, the average polarization sensitivity threshold was 56 per cent.  Some people could still see Haidinger’s brushes when the light was less than 25 per cent polarized – not quite as good as cuttlefish but still better than any other vertebrate tested to date.

“Haidinger’s brushes usually fade in a couple of seconds as your brain processes them out,” said Dr Juliette McGregor, the other lead author who has since moved to the University of Leicester. “This is one of the reasons that few people notice them day to day, and why they have previously been fairly difficult to study.”

By using LCD screens capable of constantly refreshing the effect, the researchers were also able to make the first measurements of the dynamics of Haidinger’s brushes, confirming the prediction that some individuals would perceive a ‘flip-flop’ effect, as the polarization angle is rotated.

“This result shows that your cornea can dramatically affect how you perceive polarized light,” said Dr McGregor.  As the optical properties of the cornea vary between individuals, this may partly explain why people often report their experience of seeing Haidinger’s brushes quite differently.

Dr Temple explains: “You can see Haidinger's brushes if you look at a blank white portion of an LCD screen on a computer, tablet or phone.  Tilt your head from side to side and faint yellow brushes should become visible.  With practice, you can then see them in the blue parts of the sky at 90 degrees from the sun.”

The ability to see Haidinger’s brushes is associated with the organisation of carotenoid pigments in the macula (a pigmented area that covers and protects the central part of the retina).  The risk of acquiring Age-related Macular Degeneration (AMD) has previously been correlated with low carotenoid pigment density in the macula.  The researchers are presently adapting their approach with the aim of developing a screening device to detect individuals at high risk of AMD, currently the leading cause of blindness in the developed world.

Dr McGregor said: “As 2015 is the UNESCO International Year of Light, we are delighted to have been able to use twenty-first century technology to gain new insight into an effect that has interested and entertained scientists for more than 160 years.  Plus human subjects are a lot more co-operative than octopuses!”

This research was funded by the Biotechnology and Biological Sciences Research Council and the US Air Force Office of Scientific Research.