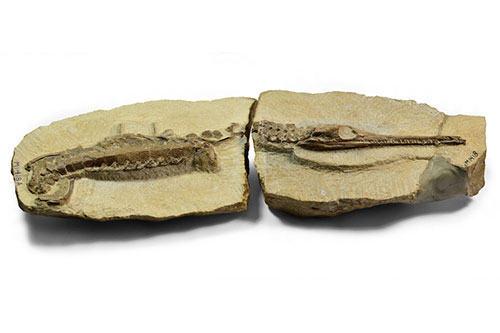 Hidden secrets about life in Somerset 190 million years ago have been revealed by researchers at the University of Bristol and the Bath Royal Literary and Scientific Institution (BRLSI) in a new study of some remarkable fossils. Thanks to exceptional conditions of preservation, a whole marine ecosystem has been uncovered – and yet it was already known 150 years ago.

The fossils come from Strawberry Bank in Ilminster, Somerset, but the site has now been lost, having been built over.  They were discovered by noted Bath-based geologist Charles Moore (1815-1881), who first spotted them when he saw some school boys kicking a rounded boulder about.  He cracked it open, and to his amazement, a perfect three-dimensionally preserved fish lay inside.  After this first find, Moore collected hundreds more nodules, and the entire collection has lain, almost forgotten, in the museum of the BRLSI in Queen’s Square, Bath ever since.

Matt Williams, curator of the collection, said: “It was obvious that these fossils where very special from the first time I saw them on joining the BRLSI.  Our stores are full of treasures, but these specimens are truly unique.  We secured some funding to clean up the specimens, and curate them, and we even uncovered some unexpected treasures.”

Collaborator Professor Michael Benton from Bristol's School of Earth Sciences, said: “When Matt first showed me the fossils I couldn’t believe it.  There are 100 nodules containing a large fish called Pachycormus, five or six tiny marine crocodiles, and two species of ichthyosaurs.  There are also early squid with their ink sacs and other soft tissues preserved, and hundreds of insects that had flown out over the shallow, warm seas of the day.”

Work will now begin in earnest on the fossils, thanks to a £250,000 grant from the Leverhulme Trust which will allow for three-dimensional scanning to be carried out and also fund young researchers to work in Bristol and Oxford with fossil fish expert, Dr Matt Friedman.

A review of the fossils is published today in the premier British geological journal, Journal of the Geological Society.

‘The Strawberry Bank Lagerstätte reveals insights into Early Jurassic life’ by Williams, M., Benton, M.J., and Ross, A. in Journal of the Geological Society