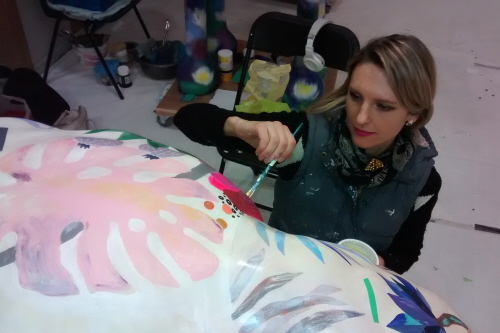 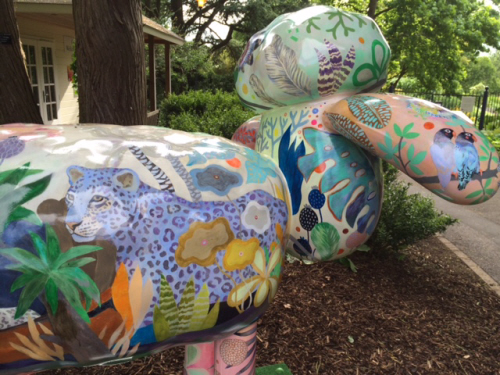 The artist behind the exotic Shaun in the Jungle sculpture will be giving an exclusive insight into her work and inspiration when she visits the University of Bristol Botanic Garden on Tuesday [28 July].

She will host an exclusive presentation of her work at the Stoke Bishop venue from 10am to 4pm, with interactive art workshops and question and answer sessions throughout the day.

Shaun of the Jungle, sponsored by Dunkley’s Chartered Accountants, is one a 70-strong flock taking over the streets of Bristol for Shaun in the City which runs until 31 August and is organised by The Grand Appeal, the Bristol Children's Hospital charity.

Martyna, a freelance illustrator and painter from Poland, gained her MA at the Academy of Fine Arts in Wroclaw, but is now settled in Bristol.

She said: "Currently, I am going through a phase in my artistic practice, where I draw inspiration from exotic nature. It felt natural to propose the design that would encompass this - I am a strong believer that the strongest works come to life when we are really engaged with the subject matter.

"In the process I had my nose in books of vintage botanical drawings and spent a lot of time analysing plants and images of exotic birds, leopards and tigers.

"I imagined the sheep as a three dimensional morphing blank canvas to wrap the design around. My proposed design was fairly 'loose' and I came up with most details during the painting process, which ensured the work has a fresh energy to it.

"My goal was to come with an engaging design that can be looked at for a long time and new elements can be discovered with each glance."

The Botanic Garden is one of six Young Nature Explorer locations. Brandon Hill, Ashton Court, Snuff Mills, Christchurch Green and Victoria Park are also part of the trail with each location focusing on a different theme, from butterflies and wildflowers to pond life and pollination to get children out engaging with nature and exploring some of Bristol’s most beautiful green spaces.

Shaun of the Jungle is located outside the welcome lodge at The Holmes on Stoke Park Road. He’s accessible 24 hours a day and is illuminated with solar lighting supplied by renewable energy experts Solarsense.

Young visitors will be able to pick up the booklet of activities, games and challenges from any location. Once the booklet has been completed, children will be awarded the status of 'Nature Explorer' and can collect their special badge to mark their achievement from The Grand Appeal shop at The Mall at Cribbs Causeway, home to three Shaun sculptures.

Entrance to the garden is £4.50. The Botanic Garden will make a donation from each adult entry to The Grand Appeal throughout the Shaun in the City trail. Free to Friends, children under 16 and University students and staff.

For details of the opening times and ticket prices, please see the Botanic Garden's website.

Bristol Children’s Hospital is one of the UK’s leading children’s hospitals treating patients from across the South West, South Wales and beyond with life-threatening illnesses and serves as the paediatric intensive care centre for the whole South West region. The hospital is an international, national and regional specialist centre of excellence for a range of services including neurosurgery, burns, cardiac, leukaemia and bone marrow transplants.

Shaun in the City is a public arts trail from Wallace & Gromit’s Children’s Foundation, the team behind the award-winning ‘Gromit Unleashed’ trail in 2013.

120 5ft sculptures of Shaun the Sheep will be designed and decorated by artists, designers and celebrities, of which 50 will placed in iconic locations in London (28 March – 31 May 2015) and 70 will be placed in Bristol (6 July – 31 August 2015). The trail will culminate in a public exhibition and charity auction in autumn 2015.

Shaun the Sheep made his debut in the Oscar-winning 1995 Wallace & Gromit film, ‘A Close Shave’, and hit the big screen earlier this year with the release of ‘Shaun the Sheep the Movie’.

Since then he has become a global superstar with over five million fans on social media and TV series broadcast in 170 territories worldwide.

Shaun the Sheep was voted the nation’s favourite BBC children’s TV character from the last 70 years in a recent Radio Times poll, beating Postman Pat and Sooty and Sweep who came second and third respectively.