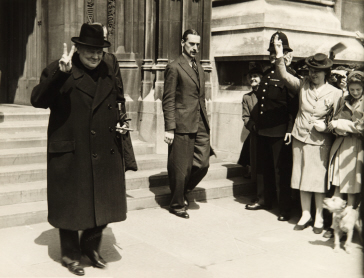 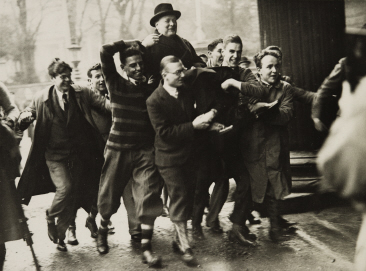 Winston Churchill undergoing a student 'rag' on the day of his installation as Chancellor on 13 December, 1929 University of Bristol's Special Collections

A series of special events in Bristol will celebrate the life of Sir Winston Churchill - one of the greatest wartime leaders of the 20th century.

Churchill also stood as the University of Bristol’s longest-standing Chancellor from 1929 to 1965, during which time he also led Britain during the Second World War.

The University has organised a series of free public lectures as part of the national celebrations, with the first one getting underway on Wednesday 4 March.

Discussing ‘Churchill: for and against’, Dr Paul Addison will look at why Churchill was such a controversial figure in his lifetime. Even today, his critics and admirers remain sharply divided over his merits.

Dr Addison, an Honorary Fellow of the University of Edinburgh, has written two books about Churchill and will discuss the reasons why Churchill continues to generate debate, offering a personal assessment of the former Prime Minister’s achievements and failures.

The series continues on 18 March when historian Sir David Cannadine, the chairman of the Churchill 2015 commemorations, explores Churchill’s unique relationship with Bristol.

Churchill’s granddaughter Celia Sandys will be sharing memories of her grandfather on 21 April. She will journey through her personal memories of Churchill as a family man, including holidaying with him in the Mediterranean and growing up at Chartwell and Chequers.

The series concludes on 29 April, when Professor David Reynolds reflects on Churchill’s historical writings, especially his memoirs of the two world wars, which won him the Nobel Prize for Literature in 1953.

Professor Reynolds, Professor of International History and Chairman of the History Faculty at the University of Cambridge, will also consider how a vision of history and of Britain’s place in it was central to Churchill’s whole worldview as a statesman.

Churchill and the University of Bristol

Sophie Hatchwell, teacher and PhD student in the Department of History of Art, has been researching Churchill’s 36 years as the Chancellor of the University of Bristol.

On 13 December 1929, after the ceremony installing him as Chancellor, Churchill joined in the student RAG. He was carried through the streets on their shoulders, taken to the Victoria Rooms - home to the Students' Union at the time - and took part in a performance where he was arrested, tried and imprisoned. (You can watch news footage of the event online.)

In 1941, Churchill visited Bristol to bestow honorary degrees on John Winant, American Ambassador, and Robert Menzies, the Prime Minister of Australia at the time. But the night before, Bristol was hit by a German air raid and incendiaries had already destroyed the Great Hall of the Wills Memorial Building.

Dismissing smouldering rubble and what turned out to be an unexploded bomb, Churchill insisted that the ceremony go ahead. It was held instead in the smaller but undamaged Reception Room next door. ​

These are just some of the stories Sophie Hatchwell has uncovered. She said: “I was thrilled to find such a wealth of information tucked away in our own archives. This work has given me a new appreciation of one of the most significant figures in British history, and an insight to the rich history of the University.”