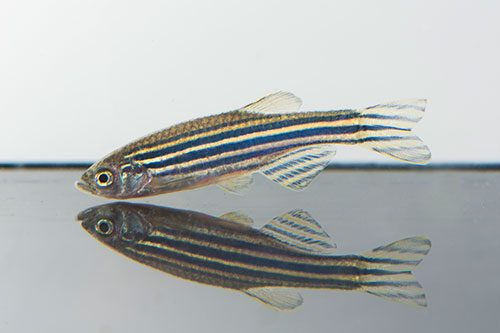 The research focussed on zebrafish

Fish react emotionally to stress, indicating a degree of consciousness, a ground-breaking new study, led by scientists at the University of Stirling’s Institute of Aquaculture and co-authored by Professor Toby Knowles of the University of Bristol, has found.

For the first time in fish, the team scientifically demonstrated that exposure to stress resulted in ‘emotional fever’ – where fish temporarily increased their body temperatures by up to four degrees Celsius by moving through a thermal gradient.

Dr Sonia Rey, Research Fellow at the University of Stirling’s Institute of Aquaculture said: “Our study reopens the discussion upon sentience in fish, which is fundamental to our knowledge of the species and their welfare.  This will have a bearing on the development of future regulations and mitigation measures around fish.

“With fish brains lacking a cerebral cortex, unlike mammals, birds and reptiles, it has been claimed to date that they have no consciousness.  This research removes one of the key arguments underpinning that claim.”

The research, which focussed on zebrafish, also involved the Universitat Autònoma de Barcelona and features in the journal Proceedings of the Royal Society B.

Dr Rey continues: “Fish cannot internally regulate their own body temperature.  Rather, it equates to the temperature of the environment they are in, and so fish travel between different waters to attain their optimal temperature.

“In our study we allowed the fish to choose their own temperature by providing them with a thermal gradient in which they could freely move between interconnected chambers holding water at varying degrees Celsius.

“Groups of fish that had been gently submerged in a net for a short period chose to travel, when they were released back into the same temperature chamber, to warmer waters, where they then stayed for several hours.

“This ‘emotional fever’ was the effect of their short confinement. Further studies are now needed to explore the underlying mechanisms of this stress-induced hyperthermia, and to test it against different stressors.”

Dr Simon MacKenzie, Reader in Marine Biotechnology at the Institute of Aquaculture, said: “Our study has significant impact upon our understanding of how fish use thermal choice to optimise their response to stress.  This game-changing observation will have far reaching implications in how we approach research in fish and how we consider their welfare.”

Professor Toby Knowles of Bristol’s School of Veterinary Sciences said: “The University of Bristol and the Institute of Aquaculture at Stirling University have a long history of successful collaborative research.  Dr Rey and I are also currently working together, with the Scottish salmon industry, on a large Defra research project aimed at reducing the problem of fin damage in farmed salmonids.”