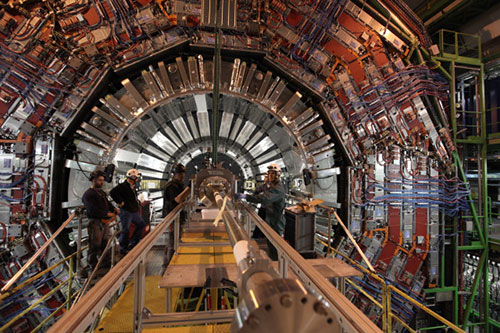 The first results from direct searches for new physics were announced today from CERN’s energy-upgraded Large Hadron Collider (LHC). Among these results was a search for signs of a new theory called supersymmetry in which members of the University of Bristol particle physics group have played a leading role.

The LHC is the world's highest energy particle accelerator.  After an almost two year shutdown and several months’ re-commissioning, the LHC delivered physics data to its experiments from June to November this year at the unprecedented energy of 13 TeV, almost double the collision energy of its first run.  The energy of the colliding protons is such that new particles much heavier than the proton can be created including the famous Higgs boson, and possibly even heavier and more exotic particles hypothesised in new physics theories.  One such theory is called supersymmetry, which predicts an exotic partner for each currently known particle type.

Physicists from the University of Bristol and elsewhere have been analysing data from the LHC’s Compact Muon Solenoid (CMS) experiment to look for signs of the production of gluinos (the supersymmetric partners of the gluons that hold quarks together inside protons) that then decay into quarks and neutralinos (the supersymmetric partners of photons and Z bosons).  If neutralinos exist, they could even be candidates for the dark matter required to explain the behaviour of galaxies and the evolution of the universe.

CMS was able to effectively and efficiently produce these first results on a timescale of a month, thanks in part to the use of the Bristol particle physics group's dedicated computing, co-funded by the University.

No significant evidence of the production of gluinos was observed in the collisions, but the possible mass of these particles is now constrained to be larger than 1600 GeV for light neutralinos, significantly extending the reach of previous results.  During 2016 the CMS data sample is expected to grow ten-fold which leaves good prospects for discovering physics beyond the standard model of particle physics.

Professor Joel Goldstein, leader of the Bristol CMS activities said: “It has been very exciting to see the LHC switch on and deliver physics data so quickly, and the physicists working on these analyses here in Bristol and around the world have done a remarkable job of producing and cross-checking their results in such a short time.  In a few months we will have even more data, and perhaps even the first signs of something truly new.”