New optical chip lights up the race for quantum computer 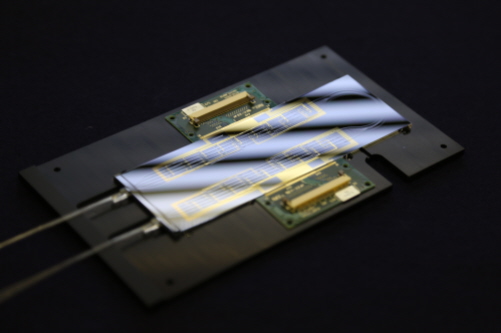 The silicon based quantum optics lab-on-a-chip

The microprocessor inside a computer is a single multipurpose chip that has revolutionised people’s life, allowing them to use one machine to surf the web, check emails and keep track of finances. Now, researchers from the University of Bristol in the UK and Nippon Telegraph and Telephone (NTT) in Japan, have pulled off the same feat for light in the quantum world by developing an optical chip that can process photons in an infinite number of ways.

The fully reprogrammable chip brings together a multitude of existing quantum experiments and can realise a plethora of future protocols that have not even been conceived yet, marking a new era of research for quantum scientists and engineers at the cutting edge of quantum technologies.  The work is published today [14 August] in the journal Science.

Since before Newton held a prism to a ray of sunlight and saw a spectrum of colour, scientists have understood nature through the behaviour of light.  In the modern age of research, scientists are striving to understand nature at the quantum level and to engineer and control quantum states of light and matter.

A major barrier in testing new theories for quantum science and quantum computing is the time and resources needed to build new experiments, which are typically extremely demanding due to the notoriously fragile nature of quantum systems.

This result shows a step change for experiments with photons, and what the future looks like for quantum technologies.

Dr Anthony Laing, who led the project, said: “A whole field of research has essentially been put onto a single optical chip that is easily controlled. The implications of the work go beyond the huge resource savings.  Now anybody can run their own experiments with photons, much like they operate any other piece of software on a computer.  They no longer need to convince a physicist to devote many months of their life to painstakingly build and conduct a new experiment.”

The team demonstrated the chip’s unique capabilities by re-programming it to rapidly perform a number of different experiments, each of which would previously have taken many months to build.

Bristol PhD student Jacques Carolan, one of the researchers, added: “Once we wrote the code for each circuit, it took seconds to re-programme the chip, and milliseconds for the chip to switch to the new experiment. We carried out a year’s worth of experiments in a matter of hours. What we’re really excited about is using these chips to discover new science that we haven’t even thought of yet.”

Professor Jeremy O'Brien, Director of the Centre for Quantum Photonics at Bristol University, explained: “Over the last decade, we have established an ecosystem for photonic quantum technologies, allowing the best minds in quantum information science to hook up with established research and engineering expertise in the telecommunications industry. It’s a model that we need to encourage if we are to realise our vision for a quantum computer.”

The University of Bristol's pioneering ‘Quantum in the Cloud’ is the first and only service to make a quantum processor publicly accessible and plans to add more chips like this one to the service so others can discover the quantum world for themselves.