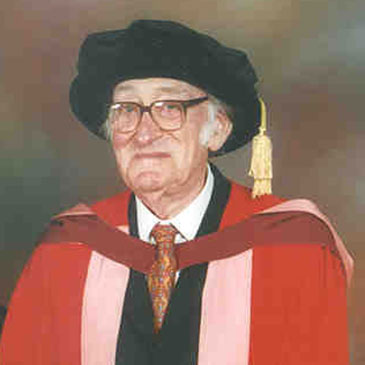 Charles Tomlinson, Professor Emeritus in the Department of English and an internationally acclaimed poet, died on 22 August 2015 aged 88. His colleague and friend, Professor David Hopkins, offers a remembrance.

Charles Tomlinson was one of the most distinguished and celebrated members of Bristol’s English Department. He was born in Stoke on Trent in 1927, and grew up in the smoky industrial environment of the Potteries, where his interest in literature was first fostered not in English lessons but by a teacher of Modern Languages, a wartime Jewish refugee from Germany.

Charles maintained throughout life a competence and fluency in several European languages, and a sustained devotion to continental European literature. It was also at school that he met his future wife, Brenda, who was to be his lifetime companion and adviser, and with whom he shared the full range of his human and artistic interests. Charles went from school to read English at Queens’ College Cambridge, and Brenda to read History at Bedford College, London, followed by graduate work in Art History at the Warburg and Courtauld Institutes, where her teachers included Ernst Gombrich and Anthony Blunt. Charles and Brenda were married shortly after graduation.

Charles had been disappointed by the poor teaching he received during his earlier time in Cambridge, and even contemplated leaving the University to pursue an artistic career. Brenda, however, persuaded him to stay on, and his spirits were eventually revived by the return to Cambridge after war service of a young academic, Donald Davie, who was appointed Charles’s supervisor, encouraged his writing, and became a lifelong friend and champion.

Charles did not immediately enter the academic world on graduation, but spent some time as a schoolteacher in London, exhibiting his graphic work in galleries, before travelling to Italy to work as the private secretary to the man of letters and former friend of Henry James, Percy Lubbock. This arrangement did not work out, but Charles and Brenda stayed on for a few months, consolidating a love of Italy which remained for life.

Charles eventually returned to England on a research scholarship to Royal Holloway, University of London, where he completed a Master’s dissertation on DH Lawrence. In 1957 he was appointed to a lectureship in English at Bristol, where he stayed for the rest of his professional life, being promoted to a personal professorship in 1982, and retiring, after 36 years’ service, in 1992. He was awarded the degree of Doctor of Letters, honoris causa, by the University in 2004. He was also elected a Fellow of the Royal Society of Literature in 1974, and was awarded the CBE for services to literature in 2001.

But it was for his poetry that Charles first made his mark, and is perhaps most widely known in the larger literary world. He was one of the first English men of letters to appreciate the great achievements of the American poets of the mid-20th century, particularly the work of William Carlos Williams, Marianne Moore, Yvor Winters, Louis Zukofsky and George Oppen – all of whom he came to know personally – and his poetry showed from the start, particularly in its versification, a strong American influence.

From early days, Charles travelled with his family to the USA on a regular basis, holding several visiting professorships and fellowships at distinguished American universities, and his second major collection of poems, Seeing is Believing (1958) appeared in the USA two years before its publication in this country. Charles’s verse – fastidious, meticulously observant of the human and natural world, carefully crafted, but never matter-of-fact or abstract – constituted a radical break with the extravagance of Dylan Thomas and the New Apocalypse poets who were fashionable in his student days. In a poetic oeuvre which spanned over five decades (his collected poems run to over 700 pages, with a volume of translations from Russian, Spanish, French, and Italian originals [1983] containing over another 100), he established himself as one of the leading English poets of his generation. ‘Only in the greatest poets,’ wrote Donald Davie of Charles’s work, ‘is content so intimately married to form’. ‘His poems,’ wrote Hugh Kenner, ‘are among the best in the English language in this century’.

Charles was a very special colleague and friend. Though one of the most distinguished and respected literary intellectuals of his day, he was entirely without pretention or misplaced vanity. One sometimes forgot that one had someone so famous in one’s midst. The inevitably rather trivial and myopic business of department meetings was, however, always freshened with a new blast of reality when one realised that across the table was someone who had met Ezra Pound, had read The Waste Land aloud in the presence of TS Eliot’s widow, and had perhaps just returned from a weekend with his close friend, the Poet Laureate Ted Hughes, or a rendezvous with the Nobel Prizewinner, Octavio Paz.

Charles’s teaching was, it hardly needs saying, inspirational for more able students, but he was also patient and kindly to those with more modest gifts. Though he was a genuine citizen of the world, forever flying off (always with Brenda) to France, Italy, Mexico, the USA and elsewhere to lecture, read his poetry, or receive one of the literary prizes which were regularly showered on him, he was never happier than when at home, surrounded by his family, his books, his music, and his artworks in his remote Gloucesteshire cottage. On my arrival in Bristol, he made himself immediately known to me (we shared an interest in the translator-poets of the 17th and 18th centuries, and a passion for opera and chamber music) and we soon became good friends, visiting one another regularly en famille, and meeting up in the gods at the Bristol Hippodrome for performances by Welsh National Opera. My son and daughter have the fondest memories of walks with Charles and Brenda in the Ozleworth woods to see the local badgers’ setts, of conversations with Charles about fishing – and of Brenda’s delicious teas.

The last few years were not kind to Charles. Two failed cataract operations left him virtually blind (a cruel blow for someone with such an acute visual sense), and a heart condition, combined with memory loss, made him increasingly unable to enjoy most of his literary, and even his musical, pleasures. Brenda, though by no means in robust health herself, displayed selfless devotion in making Charles as comfortable as possible towards the end, and was able, together with her two daughters, to organise things so that he was able to pass away peacefully at home.