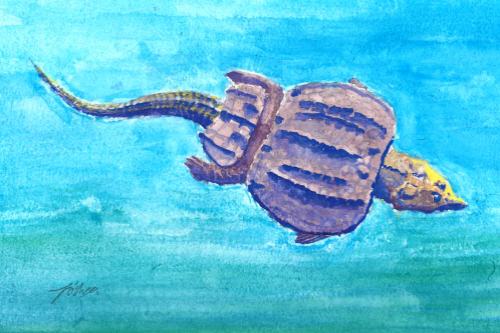 The marine shell-crushing reptile Psephoderma alpinum, one of the last placodonts on Earth, just reported from Somerset James O’Shea

The diversity of animal life that inhabited the coastlines of South West England 200 million years ago has been revealed in a study by an undergraduate at the University of Bristol.

Klara Nordén studied material from the Late Triassic sediments at the Marston Road Quarry, near Nunney in Somerset, which are rich in microscopic fossil teeth.  Although the fossils were collected in the 1980s by Gloucester-based geologist Mike Curtis, they had never been studied or described – until now.

Klara’s research reveals the diverse fauna that once inhabited shallow coastal waters in what at the time was a tropical archipelago in Somerset.  The study identifies a total of six species of bony fish and six species of shark as well as Pachystropheus rhaeticus, a crocodile-like animal, and a placodont, an armoured turtle-like reptile whose flat teeth were ideal for crushing the shells of invertebrate prey found in the muddy sediment on the seafloor.

Klara said: “We were excited to find teeth from a placodont, which are rare in British sediments.  The presence of placodonts indicates that the area was once a coastal environment, with shallow waters and abundant invertebrate prey.   Placodonts were in decline in the Late Triassic, and the placodont teeth from Marston Road must come from some of the last of these reptiles to exist on Earth.”

The study also reports the first finding of sphenodontians, small, lizard-like reptiles, in British marine sediments.  Sphenodontians inhabited the islands in the archipelago, which they shared with Thecodontosaurus, the famous ‘Bristol dinosaur’.

Professor Michael Benton, Klara’s project supervisor, said: “It’s really unusual to find remains of land-living animals mixed in with the marine fishes and sharks.  They must have been washed off the land into the shallow sea, and this provides evidence to match the age of the marine and terrestrial deposits in the area.”

Together, the fossils reveal the details of a coastal landscape lost for 200 million years.  They paint a picture very different from today’s – where British shores were inhabited by exotic species of sharks, fish and turtle-like placodonts, whose armour might have protected them from the large predators roaming the waters.

Collaborator Dr Chris Duffin said: “I began working on these fossils from the Bristol area forty years ago and it's great to see such wonderful work by a Bristol undergraduate.”

The research is published today [14 August] in Proceedings of the Geologists’ Association.