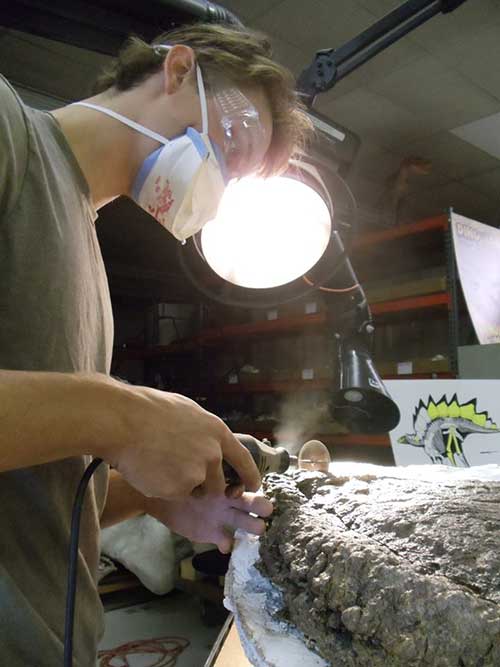 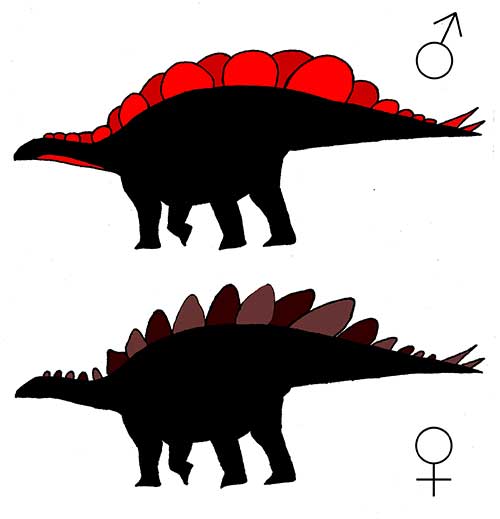 The first convincing evidence for sexual differences in a species of dinosaur has been described by University of Bristol MSc student, Evan Saitta, in a study of the iconic dinosaur Stegosaurus, published today in the scientific journal PLOS ONE.

Stegosaurus, a large, herbivorous dinosaur with two staggered rows of bony plates along its back and two pairs of spikes at the end of its tail, lived roughly 150 million years ago during the Late Jurassic in the western United States.

Professor Michael Benton, Director of the Masters in Palaeobiology at the University of Bristol said: “Evan made this discovery while he was completing his undergraduate thesis at Princeton University.  It’s very impressive when an undergraduate makes such a major scientific discovery.”

Sexual dimorphism (a term used to describe distinct anatomical differences between males and females of the same species) is common in living animals – think of the manes of lions or the antlers of deer – yet is surprisingly difficult to determine in extinct species.

Despite many previous claims of sexual dimorphism in dinosaurs, current researchers find them to be inconclusive because they do not rule out other possible explanations for why differences in anatomy might be present between fossil specimens.  For example, two individuals that differ in anatomy might be two separate species, a young and an old individual, or a male and a female individual.

Having spent six summers in central Montana as part of an excavation crew digging up the first ever Stegosaurus ‘graveyard’, Evan Saitta was able to test these alternative explanations and others in the species Stegosaurus mjosi.

The group of dinosaurs excavated in Montana demonstrated the coexistence of individuals that only varied in their plates.  Other skeletal differences indicating separation of ecological niches would have been  expected if the two were different species.

The study also found that the two varieties were not a result of growth.  CT scanning at Billings Clinic in Montana, as well as thin sections sampled from the plates for microscope analysis, showed that the bone tissues had ceased growing in both varieties.  Neither type of plate was in the process of growing into the other.

With other possibilities ruled out, the best explanation for the two varieties of plates is that one type belonged to males and the other, females.

Speculating about which is which, Evan Saitta said: “As males typically invest more in their ornamentation, the larger, wide plates likely came from males.  These broad plates would have provided a great display surface to attract mates.  The tall plates might have functioned as prickly predator deterrents in females.”

Stegosaurus may not have been the only dinosaur to exhibit sexual dimorphism.  Other species showed extra-large crests or nose horns, which were potentially sexual features.  Male animals often fight or display for mates, just like red deer or peacocks today.

Not only does Saitta’s work show that dinosaurs exhibited sexual dimorphism, it suggests that the ornamentation of at least some species was used for sexual display.

The presence of sexual dimorphism in an extinct species can provide scientists with a much clearer picture of its behaviour than would otherwise be possible.

‘Evidence for Sexual Dimorphism in the Plated Dinosaur Stegosaurus mjosi (Ornithischia, Stegosauria) from the Morrison Formation (Upper Jurassic) of Western USA’ by Evan Saitta in PLOS ONE