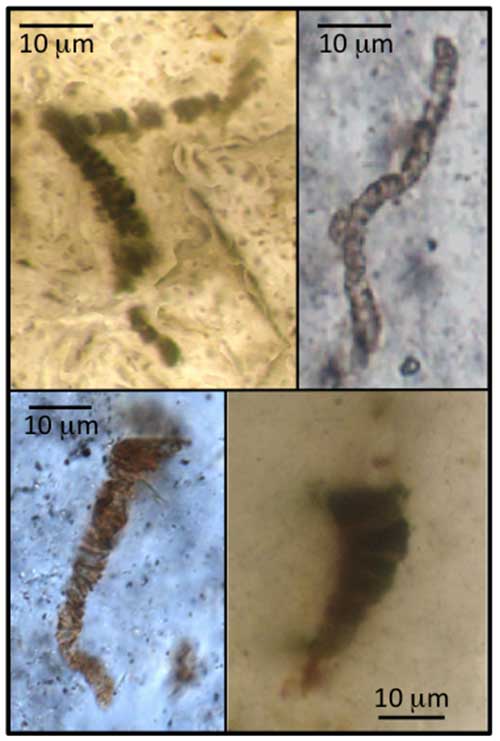 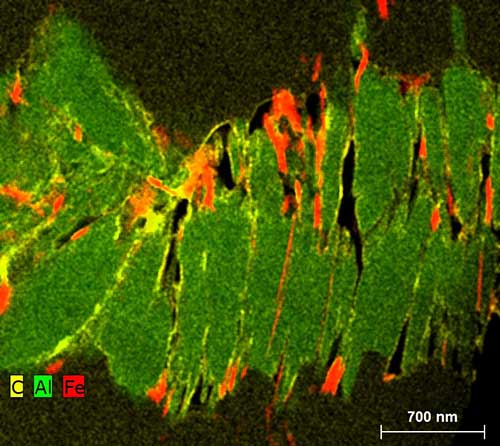 Elemental map of a cross section through a pseudofossil. It can be seen that the artefact consists of a complex stack of plate-like aluminium-rich clay minerals (green, stacked from left to right). Some of these are coated with later generation of carbon (yellow) and iron (red) giving the false impression of cellular compartments.

The new research, published this week in Proceedings of the National Academy of Sciences USA, shows that structures once thought to be Earth’s oldest microfossils do not compare with younger fossil candidates but have, instead, the character of peculiarly shaped minerals.

In 1993, US scientist Bill Schopf described tiny carbon-rich filaments within the 3.46 billion-year-old Apex chert (fine-grained sedimentary rock) from the Pilbara region of Western Australia, which he likened to certain forms of bacteria, including cyanobacteria.

These ‘Apex chert microfossils’ – between 0.5 and 20 micrometres wide – soon became enshrined in textbooks, museum displays, popular science books and online reference guides as the earliest evidence for life on Earth.  In 1996, these structures were even used to test and help refute the case against ‘microfossils’ in the Martian meteorite ALH 84001.

Even so, their curious colour and complexity gave rise to some early questions.  Gravest doubts emerged in 2002, when a team led by Oxford’s Professor Martin Brasier (co-author of this current study) revealed that the host rock was not part of a simple sedimentary unit but rather came from a complex, high-temperature hydrothermal vein, with evidence for multiple episodes of subsurface fluid flow over a long time.  His team advanced an alternative hypothesis, stating that these curious structures were not true microfossils but pseudofossils formed by the redistribution of carbon around mineral grains during these hydrothermal events.

Although other research teams have since supported the hydrothermal context of Professor Brasier, the ‘Apex microfossil’ debate has remained hard to resolve because scientific instrumentation has only recently reached the level of resolution needed to map both chemical composition and morphology of these ‘microfossils’ at the sub-micrometre scale.

Now Dr David Wacey, a Marie Curie Fellow in Bristol’s School of Earth Sciences, in collaboration with the late Professor Brasier, has come up with new high-spatial resolution data that clearly demonstrate that the ‘Apex chert microfossils’ comprise stacks of plate-like clay minerals arranged into branched and tapered worm-like chains.  Carbon was then absorbed onto the edges of these minerals during the circulation of hydrothermal fluids, giving a false impression of carbon-rich cell-like walls.

Dr Wacey and team used transmission electron microscopy to examine ultrathin slices of ‘microfossil’ candidates, to build up nanoscale maps of their size, shape, mineral chemistry and distribution of carbon.

Dr Wacey said: “It soon became clear that the distribution of carbon was unlike anything seen in authentic microfossils.  A false appearance of cellular compartments is given by multiple plates of clay minerals having a chemistry entirely compatible with a high temperature hydrothermal setting.

“We studied a range of authentic microfossils using the same transmission electron microscopy technique and in all cases these reveal coherent, rounded envelopes of carbon having dimensions consistent with their origin from cell walls and sheaths.  At high spatial resolution, the Apex ‘microfossils’ lack all evidence for coherent, rounded walls.  Instead, they have a complex, incoherent spiky morphology, evidently formed by filaments of clay crystals coated with iron and carbon.”

Before his death Professor Brasier commented: “This research should, at long last, provide a closing chapter for the ‘Apex microfossil’ debate.  Such discussions have encouraged us to refine both the questions and techniques needed to search for life remote in time and space, including signals from Mars or beyond.  It is hoped that textbooks and websites will now focus upon recent and more robust discoveries of microfossils of a similar age from Western Australia, also examined by us in the same article.”