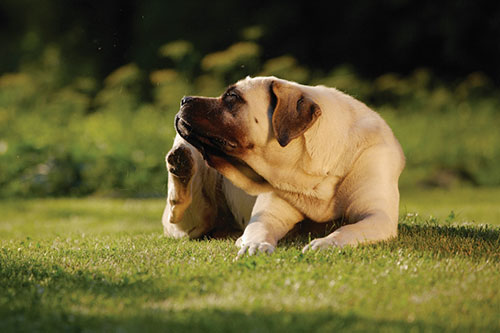 Vets across the UK are set to take part in the Big Tick Project, the largest nationwide collection of ticks from dogs in a bid to help scientists, led by Professor Richard Wall at the University of Bristol, track what is feared to be a growing threat to people and their dogs from tick-borne zoonotic diseases such as Lyme disease (Borrelia).

In the UK, Public Health England estimates the number of new cases each year at around 3,000 while Lyme disease charities say the figure could even be as high as 15,000 annually.  However, the majority of people are unaware that this potentially debilitating condition also affects our pet dogs.

The Big Tick Project is being launched and supported by TV presenter, naturalist and dog lover Chris Packham, and aims to raise awareness of the risks and symptoms associated with tick-borne disease, and to educate owners about how they can reduce their dog’s exposure to ticks and the diseases they carry.

Lyme disease is caused by a bite from an infected tick.  Dogs can be bitten while being taken for walks through wooded areas or parkland in both urban and rural areas.  Signs including lameness, lethargy and fever can be seen and, left untreated, these can lead to more serious conditions such as kidney disease and heart failure.  Many cases of tick infestation are likely to go unnoticed by owners as they are only detected by a thorough examination.

Throughout spring and early summer when ticks are most active, vets taking part in the Big Tick Project will be giving dogs visiting their practice a tick check.  The ticks collected by vet practices will be sent for testing to the team of scientists at the University of Bristol leading the Big Tick Project.

Professor Richard Wall and colleagues in Bristol’s School of Biological Sciences will be examining the ticks for the presence of Lyme Disease and other tick-borne diseases which it is feared may be emerging in the UK.  Owners whose dogs have taken part in the project at participating vets will receive a Big Tick Project certificate and have helped advance the knowledge surround tick-borne disease in the UK.

Professor Wall said: “Current evidence suggests that many tick-borne diseases in northern Europe are increasing in prevalence as a result of factors linked to habitat modification, changes in host abundance, changes in vector distributions, increasing pet travel and climate change.  Warmer and wetter winters and milder wetter summers, in particular, may allow the normal highly seasonal pattern of tick activity to be extended, giving more continuous periods of exposure.  In Great Britain the distribution of ticks is estimated to have expanded in the last ten years by 17 per cent and the abundance of ticks to have increased at 73 per cent of locations surveyed.”

To reduce the risk associated with ticks in dogs, veterinary surgeons have innovative and convenient treatments that are only available on prescription.  The options available to protect dogs against exposure to ticks include spot-ons (typically applied every four weeks), sprays, collars and oral chewable formulations which can give up to 12 weeks protection.  For best advice on how to remove a tick correctly from your pet please speak to your vet.

1.        The Big Tick Project is a response to what appears to be the rapidly growing problem of Lyme disease in the UK with potential for health and economic impacts.  Participating veterinary practices will be asked to examine dogs in their practice for ticks each week using a standard grooming protocol and complete a questionnaire relating to the clinical history of each dog.  Tick samples will be sent to the University of Bristol, where they will be identified to species, life-cycle stage and sex.  All ticks of the same species found on any one dog will be pooled for analysis.

2.         On 25 January 2012, the School of Biological Sciences at the University of Bristol published the findings of a survey of pet dogs in Scotland, England and Wales, which showed that, at 0.5 per cent or 481 infected ticks per 100,000 dogs, the prevalence of ticks infected with Lyme disease in the dog population may be much higher than previously thought.  Consequently, it was concluded that the percentage of ticks in the UK infected with Lyme borreliosis and the corresponding risk to humans is also likely to be much higher than previously believed.