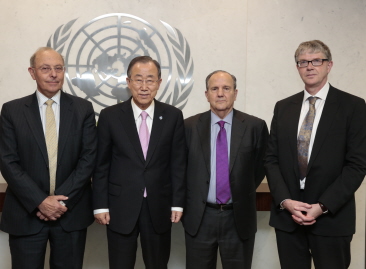 Incidences of torture and ill-treatment around the world have not been diminishing and the need for effective prevention is ‘as great as it ever has been’, according to United Nations human rights expert Professor Malcolm Evans OBE.

Speaking at the UN General Assembly in New York, he urged member states to do more to tackle domestic corruption in order to prevent such episodes of abuses.

Professor Evans, from the University of Bristol Law School, is Chair of the UN Subcommittee for Prevention of Torture and was presenting its 7th annual report.

He was also invited to a special meeting with UN Secretary General Ban Ki-moon to discuss issues concerning combating torture.

Professor Evans said: “It was an honour to have the opportunity to meet the Secretary General. The meeting both exemplified and reinforced the depth of commitment within the UN to torture prevention and has paved the way for its having an even greater prominence within the Secretary General’s Rights up Front initiative - an extremely positive and practical development.”

The UN Subcommittee for Prevention of Torture was established in 2002 and has a mandate to visit all places where persons may be deprived of their liberty, including police stations, prisons (military and civilian), detention centres, and mental health and social care institutions while ensuring that States are in compliance with their obligations as delineated under the Optional Protocol to the Convention against Torture.

In its report, however, the Subcommittee notes that its preventive work appeared to be getting more challenging, particularly in those States with higher levels of corruption where torture and ill-treatment were less likely to be discovered.

Professor Evans said: “States have very clear Convention commitments, yet we have experienced increasing delays in being provided with the information and facilities which are necessary to undertake visits efficiently and, for the first, time, we found it necessary to suspend one of our full visits, to Azerbaijan, due to repeated problems in securing immediate and unimpeded access to places of detention.”

Although he welcomed the increase in the number of States to have ratified the Optional Protocol – now at 74 – Professor Evans also highlighted the burdensome lack of resources in the UN Human Rights Office which constrained the Subcommittee to only three full visits during 2013 and three others this year.

He added: “Frankly, this number of visits is far too few too enable the SPT to properly fulfil its mandate. At this pace, States will receive a full regular visit only once in 25 years.

Further information is available from the UN News Centre.