How dinosaurs divided their meals at the Jurassic dinner table 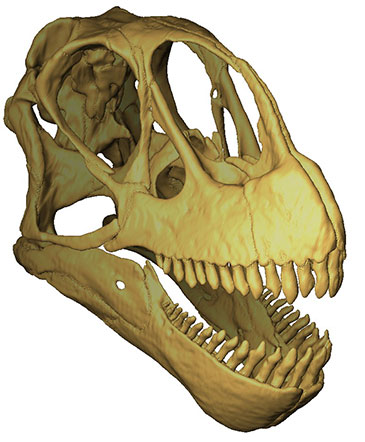 How the largest animals to have ever walked the Earth fed, and how this allowed them to live alongside one another in prehistoric ecosystems is the subject of new research from the University of Bristol and the Natural History Museum, London.

The sauropods – large, long-necked plant-eating dinosaurs such as Diplodocus and Brachiosaurus – dominated the land between 210 and 65 million years ago.  They were the largest land animals of all time, with the biggest weighing 80 tonnes (more than 11 elephants) and would have needed vast amounts of food.

Despite this, multiple sauropod species often lived alongside each other. The most notable example is the community of the Late Jurassic Morrison Formation, a distinctive sequence of sedimentary rock in the western United States from which over 10 species of sauropod are known.

How so many giant herbivores could have coexisted has long been a mystery: even the highly diverse faunas seen in modern Africa only support one truly gigantic species, the elephant.  This is made even more puzzling by the harsh, semi-arid environment of the Morrison Formation during the Jurassic, which would have limited plant growth.

A study conducted by David Button, a PhD student in Bristol's School of Earth Sciences and the Natural History Museum, and colleagues used a novel combination of approaches to investigate this problem.

Although sauropods were gigantic, their heads were comparatively very small and so how they ingested enough food has puzzled many scientists.  The researchers focussed on the skull and jaws of sauropods, using a variety of biomechanical techniques to investigate how they functioned and what this would mean for sauropod ecology.

Movie showing the production of the Camarasaurus model with the skull built from individual bones, then with the reconstructed jaw muscles (in pink) being added in; the skull then goes transparent and the muscles are ‘dissected’ away from the most outward to the most inward to get a better look

Using CT scans, the researchers digitally reconstructed the skulls of Camarasaurus and Diplodocus, along with the jaw and neck muscles of both species from the traces left on the bones where these muscles were attached in life.  These two species are very common in the Morrison Formation, and are known to have widely co-existed.  From this data, a biomechanical computer model of the skull of Camarasaurus was built using Finite Element Analysis (FEA), a modelling technique often employed in engineering and design to calculate stress and strain distribution in complex shapes.  This model was then compared to a pre-existing model of Diplodocus in order to investigate how the dinosaurs fed.

David Button said: “Our results show that although neither could chew, the skulls of both dinosaurs were sophisticated cropping tools. Camarasaurus had a robust skull and strong bite, which would have allowed it to feed on tough leaves and branches.  Meanwhile, the weaker bite and more delicate skull of Diplodocus would have restricted it to softer foods like ferns.  However, Diplodocus could also have used its strong neck muscles to help it detach plant material through movements of the head.  This indicates differences in diet between the two dinosaurs, which would have allowed them to coexist.”

The researchers also used a series of biomechanical measurements from other sauropod species to calculate the functional disparity in their skulls and jaws and found that other Morrison Formation sauropods were also highly varied in feeding adaptations, suggesting different diets.

Co-author, Professor Emily Rayfield of the University of Bristol said: “In modern animal communities differences in diet such as this – termed ‘dietary niche partitioning’ – allow multiple similar species to coexist by reducing competition for food.  Although, dietary niche partitioning has been suspected between Morrison Formation sauropods based on their structural features and patterns of tooth-wear, this is the first study to provide strong, numerical, biomechanical evidence for its presence in a fossil community.”

The research also helps to shed light on the evolution of sauropod feeding mechanisms and how these gigantic creatures managed to eat enough food to sustain their tremendous bulk.  Whereas earlier sauropods would have been able to eat a wide range of plants, later lineages show the parallel evolution of traits suggesting that they were more specialized in their feeding habits.

Co-author Professor Paul Barrett of the Natural History Museum added: “Our study provides insight not only into the ecology of dinosaurs but more generally into the mechanisms supporting species-richness in other animal communities, both from the fossil record and in the present-day.”

The research, funded by the Natural Environment Research Council (NERC), is published today in Proceedings of the Royal Society B.