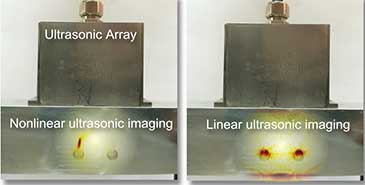 The next generation of aircraft could be thinner and lighter thanks to the development of a new imaging technique that could detect damage previously invisible to acoustic imaging systems.

The nonlinear acoustic technique developed by researchers from the University of Bristol’s Ultrasonics and Non-destructive Testing (NDT) research group is published in the current issue of Physical Review Letters together with an accompanying article in Physics.

It has long been understood that acoustic nonlinearity is sensitive to many physical properties including material microstructure and mechanical damage.  The lack of effective imaging has, however, held back the use of this important method.

Currently engineers are able to produce images of the interior of components using ultrasound, but can only detect large problems such as cracks. This is like detecting only broken bones in a medical environment.

Imaging of acoustic nonlinearity is achieved by exploiting differences in the propagation of fields produced by the parallel and sequential transmission of elements in ultrasonic arrays.

Dr Jack Potter, Research Assistant in the Department of Mechanical Engineering, who led the study, said:  “Imaging acoustic nonlinearity not only provides sensitivity to smaller defects than is currently possible but may have the potential to detect damage before macroscopic material changes occur.

“This would enable intervention before cracks have even begun to form, as well as predicting the remaining life of an engineering structure.  Crucially the technique has been achieved using standard inspection equipment, which will allow for the rapid implementation of the technique in numerous applications.”

Such advances in non-destructive evaluation not only increase the safety of engineering structures but can help future design, for example, allowing the next generation of aircraft to be built thinner and lighter.

The study was supported by the UK Research Centre in Non-destructive Evaluation (RCNDE).

About the Ultrasonics and NDT (non-destructive testing) research group

The Ultrasonics and NDT (non-destructive testing) group aim to undertake internationally leading research into ultrasonics with a particular focus on NDT applications.

Non-Destructive Evaluation concerns the inspection, characterisation and quantification of the ‘health’ of engineering structures. The team at Bristol focus on a range of sonic and ultrasonic techniques. Research encompasses the development of new models of wave interactions, the use of arrays to image the interior of components and, in close collaboration with industry, practical application and technology transfer.