Through the combining glass 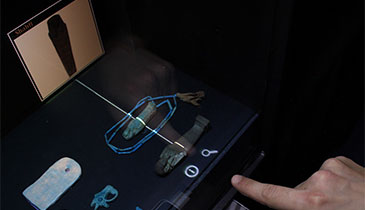 Trying on clothes when a shop is closed could become a reality thanks to new research that uses semi-transparent mirrors in interactive systems and which will be unveiled at an international conference tomorrow [Tuesday 7 October].

The research paper, to be presented at one of the world’s most important conferences on human-computer interfaces - ACM UIST 2014 [5-8 October], could change the way people interact and collaborate in public spaces, such as museums and shop windows.

The research, led by Professor Sriram Subramanian, Dr Diego Martinez Plasencia and Florent Bethaut from the University of Bristol’s Department of Computer Science, builds on a mirror’s ability to map a reflection to one unique point behind the mirror, independently of the observer’s location.

In a museum, people in front of a cabinet would see the reflection of their fingers inside the cabinet overlapping the exact same point behind the glass. If this glass is at the front of a museum cabinet, every visitor would see the exhibits their reflection is touching and pop-up windows could show additional information about the pieces being touched.

Visitors could also interact with exhibits by focusing their eyes on them. By directly pointing at the exhibit with their reflection, instead of pointing at them through the glass, people could easily discuss the features of the exhibits with other visitors.

Combining this approach with different display technologies offers interesting possibilities for interaction systems. By placing a projector on top of the cabinet, fingertips could work as little lamps to illuminate and explore dark and sensitive objects.  When a hands reflection cuts through the object, the projections on visitors’ hands could be used to reveal the inside of the object, which would be visible to any user.

The researchers have also demonstrated artistic installations that combine this approach with volumetric displays. The musicians would record loops in their digital mixers and these appear as floating above the digital mixer. Musicians could then grab these representations, to play them or tweak them with different musical effects.

Dr Diego Martinez, a Researcher in Human-Computer Interaction in the Bristol Interaction and Graphics (BIG) group, said: “This work offers exciting interactive possibilities that could be used in many situations. Semi-transparent surfaces are everywhere around us, in every bank and shop window. One example, is when people can’t access a shop because it’s closed.  However, their reflection would be visible inside the shop window and that would enable them to try clothes on using their reflection, pay for the item using a debit/credit card and then have it delivered to their home.

“The possibility to blend together the spaces in front and behind the semi-transparent mirror could mean a whole new type of interactive experience. While projectors can only augment the surface of objects, combining them with reflections allows people to reveal what’s inside the object or even purely virtual objects floating around them.”

About the ACM Symposium on User Interface Software and Technology (UIST)