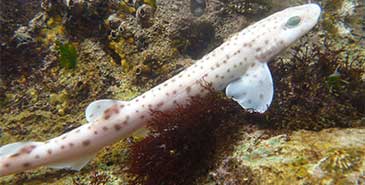 Shark populations in the Mediterranean are highly divided, an international team of scientists, led by Dr Andrew Griffiths of the University of Bristol, has shown.

Many previous studies on sharks suggest they move over large distances. But catsharks in the Mediterranean Sea appear to move and migrate much less, as revealed by this study. This could have important implications for conserving and managing sharks more widely, suggesting they may be more vulnerable to over-fishing than previously thought.

The study, published in the new journal Royal Society Open Science, used genetic techniques to investigate the population structure of the small-spotted shark, Scyliorhinus canicula. The species is common throughout Europe and has been eaten since ancient times, as documented in Roman mosaics.

In the UK anglers catch it for sport and it can often be seen in rock pools at low tide. The study found evidence of isolated populations in the Mediterranean, but no population division was found between catsharks around the North East Atlantic and British Isles. During the last ice age, about 20,000 years ago, ice sheets occupied much of the Seas and Ocean of this region and catsharks probably didn’t survive in the area. This means the region had to be recolonised, and there are very little genetic differences between them today.

The study also highlights differences in the movements of males and female catsharks – an increasingly common finding in sharks.

Dr Griffiths, based in the School of Biological Sciences, said: “It makes a lot of sense, females may want to stay in areas that are good for laying eggs, but males are often the dispersing sex, perhaps taking risks to increase how much they reproduce.”

This research has conservation implications; if patterns of population structure vary hugely in different seas, and between the sexes, then shark resilience to fishing can vary greatly, meaning that better informed management could be needed for many species.

‘A tale of two seas: contrasting patterns of population structure in the small-spotted catshark across Europe’ by Gubili C et al in Royal Society Open Science.

The work was supported by the Natural Environment Research Council (NERC Oceans 2025, at the Marine Biological Association of the UK).