Breakthrough shows how DNA is ‘edited’ to correct genetic diseases 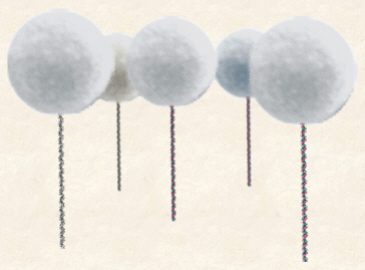 An illustration of DNA attached to magnetic beads, as used in the single molecule microscope Professor Mark Szczelkun

An international team of scientists has made a major step forward in our understanding of how enzymes ‘edit’ genes, paving the way for correcting genetic diseases in patients.

Researchers at the Universities of Bristol, Münster and the Lithuanian Institute of Biotechnology have observed the process by which a class of enzymes called CRISPR – pronounced ‘crisper’ – bind and alter the structure of DNA.

The results, published in the Proceedings of the National Academy of Sciences (PNAS) today [26 May], provide a vital piece of the puzzle if these genome editing tools are ultimately going to be used to correct genetic diseases in humans.

CRISPR enzymes were first discovered in bacteria in the 1980s as an immune defence used by bacteria against invading viruses. Scientists have more recently shown that one type of CRISPR enzyme – Cas9 – can be used to edit the human genome - the complete set of genetic information for humans.

These enzymes have been tailored to accurately target a single combination of letters within the three billion base pairs of the DNA molecule. This is the equivalent of correcting a single misspelt word in a 23-volume encyclopaedia.

To find this needle in a haystack, CRISPR enzymes use a molecule of RNA - a nucleic acid similar in structure to DNA. The targeting process requires the CRISPR enzymes to pull apart the DNA strands and insert the RNA to form a sequence-specific structure called an ‘R-loop’.

The global team tested the R-loop model using specially modified microscopes in which single DNA molecules are stretched in a magnetic field. By altering the twisting force on the DNA, the researchers could directly monitor R-loop formation events by individual CRISPR enzymes.

This allowed them to reveal previously hidden steps in the process and to probe the influence of the sequence of DNA bases.

Professor Mark Szczelkun, from Bristol University’s School of Biochemistry, said: "An important challenge in exploiting these exciting genome editing tools is ensuring that only one specific location in a genome is targeted.

“Our single molecule assays have led to a greater understanding of the influence of DNA sequence on R-loop formation. In the future this will help in the rational re-engineering of CRISPR enzymes to increase their accuracy and minimise off-target effects. This will be vital if we are to ultimately apply these tools to correct genetic diseases in patients. ”

The work was funded at the University of Bristol by the Biotechnology and Biological Sciences Research Council (BBSRC) and the Wellcome Trust.

About the Biotechnology and Biological Sciences Research Council

The Biotechnology and Biological Sciences Research Council (BBSRC) invests in world-class bioscience research and training on behalf of the UK public. Our aim is to further scientific knowledge, to promote economic growth, wealth and job creation and to improve quality of life in the UK and beyond.

Funded by Government, and with an annual budget of around £467m (2012-2013), we support research and training in universities and strategically funded institutes. BBSRC research and the people we fund are helping society to meet major challenges, including food security, green energy and healthier, longer lives. Our investments underpin important UK economic sectors, such as farming, food, industrial biotechnology and pharmaceuticals.

About the Wellcome Trust

The Wellcome Trust is a global charitable foundation dedicated to achieving extraordinary improvements in human and animal health. It supports the brightest minds in biomedical research and the medical humanities. The Trust’s breadth of support includes public engagement, education and the application of research to improve health. It is independent of both political and commercial interests.