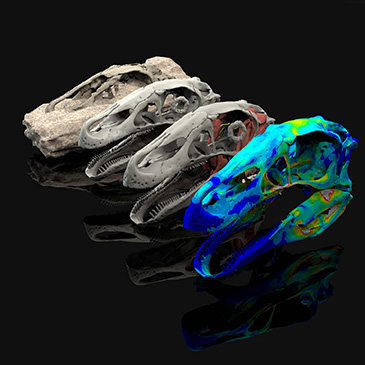 New techniques for visualizing fossils are transforming our understanding of evolutionary history according to a paper published by leading palaeontologists at the University of Bristol.

Palaeontology has traditionally proceeded slowly, with individual scientists labouring for years or even decades over the interpretation of single fossils which they have gradually recovered from entombing rock, sand grain by sand grain, using all manner of dental drills and needles.

The introduction of X-ray tomography has revolutionized the way that fossils are studied, allowing them to be virtually extracted from the rock in a fraction of the time necessary to prepare specimens by hand and without the risk of damaging the fossil.

The resulting fossil avatars not only reveal internal and external anatomical features in unprecedented and previously unrealized detail, but can also be studied in parallel by collaborating or competing teams of scientists, speeding up the pace at which evolutionary history is revealed.

These techniques have enabled palaeontologists to move beyond 'just so stories', explanations for why sauropod dinosaurs had such long necks, for example, by subjecting digital models of the fossils to biomechanical analysis, including using the same computer techniques that engineers use to design test bridges and aircraft.

However, the scientists from Bristol's School of Earth Sciences highlight that the potential benefits of fossil avatars are not being realized.

Lead author Dr John Cunningham said: "At a practical level, we simply don’t have the infrastructure for storing and sharing the vast datasets that describe fossils, and the policies of world-leading museums which protect the copyright of fossils are preventing data sharing at a legal level."

Co-author Dr Stephan Lautenschlager added: "The increasing availability of fossil avatars will allow us to bring long-extinct animals back to life, virtually, by using computer models to work out how they moved and fed. However, in many cases we are hampered by our limited understanding of the biology of the modern species to which we would ideally like to compare the fossils."

Dr Imran Rahman, also an author of the agenda-setting study, said: "Palaeontologists are making their fossil avatars freely available as files for 3-D printing and so, soon, anyone who wants one, can have a scientifically accurate model of their favourite fossil, for research, teaching, or just for fun!"

'A virtual world of paleontology' by Cunningham, J. A., Rahman, I. A., Lautenschlager, S., Rayfield, E. J. and Donoghue, P. C. J. in Trends in ecology and evolution