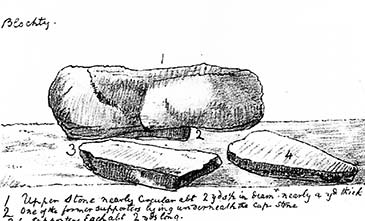 Perthi Duon in 1802, sketched by the Reverend John Skinner 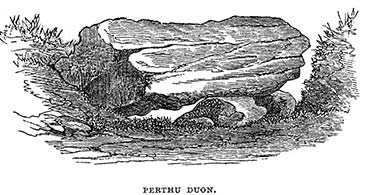 A mid-nineteenth century engraving of the monument 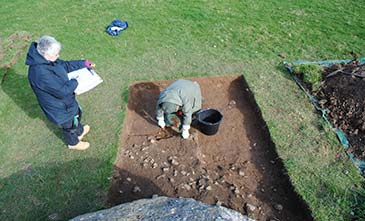 An archaeological excavation of Ynys Môn’s least known Neolithic chambered tomb – Perthi Duon, west of the village of Brynsiencyn on Anglesey – has begun. The work is being carried out by a team from the Welsh Rock Art Organisation under the direction of Dr George Nash of the University of Bristol and Carol James.

Perthi Duon, considered to be the remains of a portal dolmen, is one of eighteen extant stone chambered monuments that stand within a 1.5 km corridor of the Menai Straits.

The antiquarian Henry Rowlands reports in 1723 that beneath the large capstone were three stones, possibly upright stones or pillars.  However, by the beginning of the nineteenth century the monument was in a ruinous state, incorporated into a north-south hedge boundary, itself now removed.

Perthi Duon was visited by the Reverend John Skinner, parish vicar and amateur archaeologist, during his ten day tour of Anglesey in 1802.  He sketched the site, then called Maen Llhuyd, and described how its cap stone and three supporters remained on the spot but had "long since been thrown prostate on the ground".

For the current excavation, two trenches have been dug based on the results of a geophysical survey undertaken by the team in early 2012. The probable orientation of the entrance is east-west, with its concealed chamber at the western end.  During Neolithic times, the dead would have probably entered the monument via the small entrance, before being deposited within the chamber, either as a cremation or as disarticulated remains.

The international team of archaeologists have so far uncovered several significant features including areas of compacted-stone cairn that would once have formed a kidney-shaped mound, surrounding the chamber of the monument.

Team director, Dr George Nash said: "This discovery, along with other excavated features clearly show this monument to be a portal dolmen, one of the earliest Neolithic monument types in Wales, dating to around 3,500 BC.

"More importantly, the architecture of Perthi Duon appears to be a blueprint for other portal dolmen monuments within what is termed the Irish Sea Province.  We hope, by the end of this excavation to gain a better understanding of the burial and ritual practices that went on at this site, some 5,500 years ago."