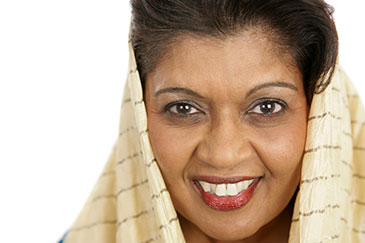 257 British Pakistani women, aged 39-61, living in West Yorkshire were interviewed for the study

Understanding menopausal symptoms through a simple checklist has serious limitations, particularly within different ethnic groups or populations, according to a new study of British Pakistani women’s beliefs about and experiences of menopause.

Dr Mwenza T. Blell of the University of Bristol interviewed 257 British Pakistani women aged 39-61 living in West Yorkshire and found that the standard checklist approach to studying menopause symptoms, which ignores women’s understanding of their own experience, leaves researchers and clinicians with gaps in their knowledge of the 'true' symptoms of menopause.

Many previous studies into the menopause have relied on standardised checklists, such as the Blatt-Kupperman index and the Menopause Symptom Checklist, that were derived from the clinical experiences of women living in New York and Chicago in the mid-twentieth century and so focus on a distinctly Western bio-medical model of menopause.

Dr Blell's study explored the potential of using an alternative approach to better identify women’s beliefs about the experiences attributable to menopause.  Information was gathered through interviews and in informal settings in order to gain a more rounded understanding of the variety of beliefs within the British Pakistani community.  The findings suggest a considerable discrepancy between women’s understanding of menopausal symptoms and the assumptions made by previous research.

Dr Blell said: "The standardised checklists claim to tell the whole story of what menopause is when really we haven’t let everyone be part of the conversation.  By adopting a more open-ended approach, instead of the standard checklist mode, useful data can be captured that specifically reflects varied beliefs and understandings of the experience of the menopause."

For example, the use of a more open-ended approach highlighted that many of the study participants mentioned an increase in the size of the abdomen – which many standard checklists consider to be unrelated to menopause – as one of their symptoms.

This is an important finding as it suggests other populations may have a different understanding about the relationship between changes in body fat patterning and menopause that has not been fully explored in Western medicine due to the established assumptions surrounding the experience of menopause.

Dr Blell said: "The amazing thing is that this finding has come up before in other studies of women of South Asian origin and has just been swept under the carpet, assumed to be a mistaken belief women need to be educated out of, when that really isn’t the case."

The understanding of other groups may indicate new directions for research such as the identification of change in body fat distribution, which seems to apply cross-culturally, and its relationship with the local understanding of menopause and its population-specific chronic disease risk.

‘Menopausal symptoms among British Pakistani women: a critique of the standard checklist approach’ by Mwenza T. Blell in Menopause, The Journal of the North American Menopause Society

The research was funded by Durham University, the UK ORSAS Scheme and the Parkes Foundation.