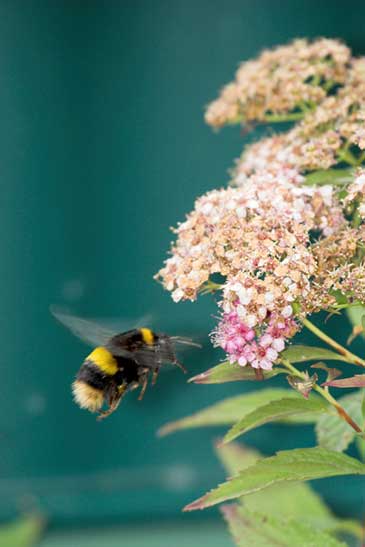 Bees use their ability to 'see' polarized light when foraging for food, researchers based at the University of Bristol have discovered. This is the first time bees have been found to use this ability for something other than navigation.

Like many other insect pollinators, bees find their way around by using a polarization sensitive area in their eyes to 'see' skylight polarization patterns.  However, while other insects are known to use such sensitivity to identify appropriate habitats, locate suitable sites to lay their eggs and find food, a non-navigation function for polarization vision has never been identified in bees – until now.

Professor Julian Partridge, from Bristol's School of Biological Sciences and the School of Animal Biology at the University of Western Australia, with his Bristol-based colleagues investigated whether bumblebees (Bombus terrestris) can learn the polarization patterns of artificial 'flowers' in order to obtain a food reward.

Polarization patterns occur on the petals of real flowers but are invisible to us and thus may be a hitherto overlooked component of floral signalling.  Around 53 per cent of flower species face downwards and thus their polarization patterns are presented in such a way as to be visually accessible to the region of the bee's eye which includes the polarization sensitive Dorsal Rim Area.  Light reflected from downward facing flowers also has the potential to contrast with skylight polarization patterns, potentially helping the bee to detect and identify such flowers.

Professor Partridge said: "Both pollinator and plant fitness is greatly dependent on the ability of pollinators to discriminate flowers accurately, and bees have been shown to be able to use a wide range of floral cues, including colour, shape, texture, certain chemical compounds and temperature, to improve the identification and recognition of flowers.

"Recent findings have added floral humidity and electric fields as additional methods with which pollinators can discriminate flowers, and it is advantageous for a plant to produce a number of different signals that a pollinator can utilise effectively.  Our findings suggest polarisation vision may provide sensory access to an additional floral cue for bees."