Why do some people develop type 1 diabetes rapidly while others at risk do not? 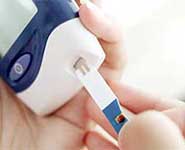 The autoimmune process leading to type 1 diabetes can develop quickly in some children and young people but very slowly in others despite the presence of proteins in their blood indicating an on-going autoimmune process in the pancreas. Thanks to combined funding of over $1 million a new study hopes to understand why some people develop type 1 diabetes very early while others who are known to be at risk are protected for decades.

Researchers from the University of Bristol’s Diabetes and Metabolism Research Group in the School of Clinical Sciences have identified a unique group of first degree relatives of individuals with type 1 diabetes who are a high risk of diabetes because they have had at least two islet autoantibodies in their blood for more than ten years but have not developed the disease.

The Bristol team, following a grant of $650,000 from the Juvenile Diabetes Research Foundation (JDRF), now wish to expand this group by identifying slow progressors in existing longitudinal studies in the USA, Germany and Australia as well as participants in TrialNet, an international network of sites which is dedicated to the study, prevention, and early treatment of type 1 diabetes. The researchers will carry out a series of tests to help understand why this group are relatively protected from the clinical signs of diabetes.

Dr Kathleen Gillespie, Senior Lecturer in the Diabetes and Metabolism research group who is leading the study, said: “It is well established that the presence of two or more islet autoantibodies in the blood is a very accurate marker for future type 1 diabetes. Yet some “at risk” individuals remain diabetes-free for decades.

“The aim of our study is to identify how the onset of diabetes is delayed for many years in some individuals. We believe that understanding the nature of this protection will ultimately help protect others.”

The researchers believe the study will show that a group of T cells, called regulatory T cells, function more effectively in slow-progressors compared with people who develop type 1 diabetes.

Specialist assays are required to measure T cell function in this way and Dr Anna Long, who recently completed her PhD with the Bristol group, has been awarded a joint travel fellowship by the Fulbright Commission and Diabetes UK of $358,000 to enable her to train in these techniques at the Benaroya Research Institute in Seattle.

In 2015, Anna will return to Bristol to establish these assays and use them to measure immune cell function in the individuals described in the JDRF study who appear to be relatively protected from developing type 1 diabetes.

The Juvenile Diabetes Research Foundation (JDRF) has awarded funding of $650,588 to the three-year research project, entitled ‘What protects islet antibody positive T1D relatives who do not progress?’

Dr Anna Long has received a Fulbright-Diabetes UK Research Award of $358,000 to research the regulation of the immune system in individuals at risk of type 1 diabetes, with the subsequent aim of examining immune regulation in individuals who develop disease more slowly than average.

About the Diabetes and Metabolism research group

Our research is focused on the causes, prediction and ultimate prevention of childhood type 1 diabetes. Improved prediction of diabetes has been a major achievement in our research. We have many interesting ongoing research projects, including the largest family study in the world which has been recruiting in the Oxford region of the UK for more than 25 years. The major questions we are addressing in our research are:

We have a strong commitment to working with diabetes specialists and research groups worldwide, in order to achieve our goal of preventing type 1 diabetes in the future.

JDRF is the leading global organization funding type 1 diabetes (T1D) research. JDRF’s goal is to progressively remove the impact of T1D from people’s lives until we achieve a world without T1D. JDRF collaborates with a wide spectrum of partners and is the only organization with the scientific resources, regulatory influence, and a working plan to better treat, prevent, and eventually cure T1D.

As the largest charitable supporter of T1D research, JDRF is currently sponsoring $530 million in scientific research in 17 countries. In 2012 alone, JDRF provided more than $110 million to T1D research. More than 80 per cent of JDRF’s expenditures directly support research and research-related education. In 2012, Forbes magazine named JDRF one of its five All-Star charities, citing the organization’s efficiency and effectiveness.

About the Fulbright Commission

The Fulbright Commission selects scholars through a rigorous application and interview process. In making these awards the Commission looks not only for academic excellence but a focused application, a range of extracurricular and community activities, demonstrated ambassadorial skills, a desire to further the Fulbright Programme and a plan to give back to the recipient’s home country upon returning.

Nearly 300,000 extraordinary women and men from all over the world have had their lives changed as participants in the Fulbright Programme. Of these alumni, approximately 15,000 UK nationals have studied in the US and 12,000 US nationals in the UK on Fulbright educational exchange programmes.

Diabetes UK is a British-based patient, healthcare professional and research charity that is the leading charity that cares for, connects with and campaigns on behalf of every person affected by or at risk of diabetes.