An ancient 'Great Leap Forward' for life in the open ocean 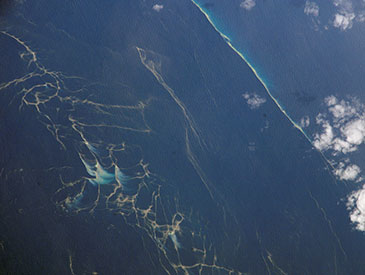 A plankton bloom in the Capricorn Channel off the Queensland coast of Australia - Trichodesmium — a photosynthetic cyanobacteria and nitrogen fixer. Astronaut photograph ISS005-E-21572 taken December 3, 2002, provided by NASA's Earth Sciences and Image Analysis

Plankton in the Earth's oceans received a huge boost when microorganisms capable of creating soluble nitrogen ‘fertilizer’ directly from the atmosphere diversified and spread throughout the open ocean.  This event occurred at around 800 million years ago and it changed forever how carbon was cycled in the ocean.

It has long been believed that the appearance of complex multicellular life towards the end of the Precambrian (the geologic interval lasting up until 541 million years ago) was facilitated by an increase in oxygen, as revealed in the geological record.  However, it has remained a mystery as to why oxygen increased at this particular time and what its relationship was to 'Snowball Earth' – the most extreme climatic changes the Earth has ever experienced – which were also taking place around then.

This new study shows that it could in fact be what was happening to nitrogen at this time that helps solve the mystery.

The researchers, led by Dr Patricia Sanchez-Baracaldo of the University of Bristol, used genomic data to reconstruct the relationships between those cyanobacteria whose photosynthesis in the open ocean provided oxygen in quantities sufficient to be fundamental in the development of complex life on Earth.

Some of these cyanobacteria were also able to transform atmospheric nitrogen into bioavailable nitrogen in sufficient quantities to contribute to the marine nitrogen cycle, delivering 'nitrogen fertiliser' to the ecosystem.  Using molecular techniques, the team were able to date when these species first appeared in the geological record to around 800 million years ago.

Dr Sanchez-Baracaldo, a Royal Society Dorothy Hodgkin Research Fellow in Bristol's Schools of Biological and Geographical Sciences said: "We have known that oxygenic photosynthesis – the process by which microbes fix carbon dioxide into carbohydrates, splitting water and releasing oxygen as a by-product – first evolved in freshwater habitats more than 2.3 billion years ago.  But it wasn’t until around 800 million years ago that these oxygenating cyanobacteria were able to colonise the vast oceans (two thirds of our planet) and be fertilised by enough bioavailable nitrogen to then produce oxygen – and carbohydrate food – at levels high enough to facilitate the next 'great leap forward' towards complex life.

"Our study suggests that it may have been the fixing of this nitrogen 'fertiliser' in the oceans at this time that played a pivotal role in this key moment in the evolution of life on Earth."

Co-author, Professor Andy Ridgwell said: "The timing of the spread in nitrogen fixers in the open ocean occurs just prior to global glaciations and the appearance of animals.  Although further work is required, these evolutionary changes may well have been related to, and perhaps provided a trigger for, the occurrence of extreme glaciation around this time as carbon was now being buried in the sediments on a much larger scale."

Dr Sanchez-Baracaldo added: "It's very exciting to have been able to use state of the art genetic techniques to help solve an age-old mystery concerning one of the most important and pivotal moments in the evolution of life on Earth.  In recent years, genomic data has been helping re-tell the story of the origins of life with increasing clarity and accuracy.  It is a privilege to be contributing to our understanding of how microorganisms have contributed to make our planet habitable."

'A Neoproterozoic Transition in the Marine Nitrogen Cycle' by Patricia Sanchez-Baracaldo, Andy Ridgwell and John Raven in Current Biology