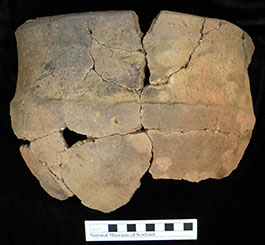 Studies of old rubbish dumps and dirty dishes have revealed that, 6,000 years ago, ancient Britons gave up their passion for fish to begin a love affair with milk. The research by archaeologists and chemists from the University of Bristol and Cardiff University is published today in Proceedings of the Royal Society B.

The change by our ancestors from hunter-gathers to farmers is one of the most intensively researched aspects of archaeology. Now a large-scale investigation of British archaeological sites dating from around 4,600 BC to 1,400 AD has examined millions of fragments of bone and analysed over 1,000 cooking pots.

The team, led by Professor Richard Evershed of the University of Bristol's School of Chemistry, developed new techniques in an effort to identify fish oils in the pots.  Remarkably, they showed that more than 99 per cent of the earliest farmer’s cooking pots lacked sea food residues.

Other clues to ancient diets lie within human bones themselves, explored by the Cardiff group led by Dr Jacqui Mulville.  The sea passes on a unique chemical signature to the skeletons of those eating seafood; while the early fisher folk possessed this signature it was lacking in the later farmers.

Lead author of the study, Dr Lucy Cramp said: "The absence of lipid residues of marine foods in hundreds of cooking pots is really significant.  It certainly stacks up with the skeletal isotope evidence to provide a clear picture that seafood was of little importance in the diets of the Neolithic farmers of the region."

Returning to the pots, the Bristol team used a compound-specific carbon isotope technique they have developed to identify the actual fats preserved in the cooking pots, showing that dairy products dominated the menu right across Britain and Ireland as soon as cattle and sheep arrived.

The ability to milk animals was a revolution in food production as, for the first time humans did not have to kill animals to obtain food.  As every farmer knows, milking stock requires a high level of skill and knowledge.  In view of this, team member, Alison Sheridan from National Museums Scotland concludes that: "The use of cattle for dairy products from the earliest Neolithic confirms the view that farming was introduced by experienced immigrants."

Viewed together the findings show that Early British hunters feasted on venison and wild boar and ate large quantities of sea food, including seals and shellfish.  With the introduction of domestic animals some 6,000 years ago they quickly gave up wild foods and fishing was largely abandoned, and people adopted a new diet based around dairying.

Dr Cramp continued: "Amazingly, it was another 4,000 years before sea food remains appeared in pots again, during the Iron Age, and it was only with the arrival of the Vikings that fish became a significant part of our diet."

Dr Mulville said: "Whilst we like to think of ourselves as a nation of fish eaters, with fish and chips as our national dish, it seems that early British farmers preferred beef, mutton and milk."

Why people changed so abruptly from a seafood to farming diet remains a mystery.  Professor Evershed said: "Since such a clear transition is not seen in the Baltic region, perhaps the hazardous North Atlantic waters were simply too difficult to fish effectively until new technologies arrived, making dairying the only sustainable option."

The study was funded by the Natural Environmental Research Council (NERC) with research on the Irish material funded by the European Union EU FP7 (Marie Curie Actions).  It was a collaboration between the Universities of Bristol and Cardiff, the National Museum of Scotland and a number of other regional museums.