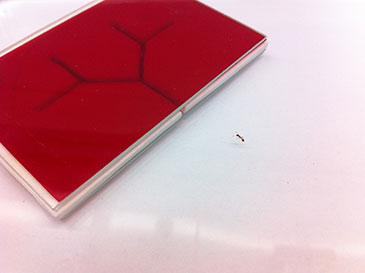 Unlike Derek Zoolander, ants don’t have any difficulty turning left. New research from the University of Bristol, published today in Biology Letters, has found that the majority of rock ants instinctively go left when entering unknown spaces.

They found that ants were significantly more likely to turn left than right when exploring new nests.  Such left bias was also present when the ants were put in branching mazes, though this bias was initially obscured by wall-following behaviour.

So why do the majority of rock ants turn left when entering unknown spaces?

Edmund Hunt said: “The ants may be using their left eye to detect predators and their right to navigate.  Also, their world is maze-like and consistently turning one way is a very good strategy to search and exit mazes.

“Furthermore, as their nest-mates are left-leaning too, there should also be safety in numbers.  Consistent turning may also help the ants to monitor nest mates during house hunting.  So perhaps leaning left is more shrewd than sinister.”

Around ten percent of people are left-handed and brain lateralization is widespread in other vertebrates.  There’s also increasing evidence for sensory and motor asymmetries in the behaviour of invertebrates, but evidence for lateral biases in ants is relatively limited.

Behavioural lateralization in invertebrates is an important field of study because it may provide insights into the early origins of lateralization seen in a diversity of organisms, the researchers said.