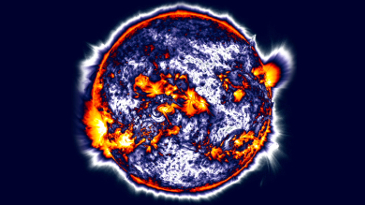 Solar ‘super-storms’ pose a catastrophic and long-lasting threat to life on Earth if they continue to go unnoticed, a space expert has warned.

Ashley Dale, from the University of Bristol, was a member of an international task force – dubbed SolarMAX – set up to identify the risks of a solar storm and how its impact could be minimized, explains how it is only a matter of time before an exceptionally violent solar storm is propelled towards Earth.

Such a storm would wreak havoc with our communication systems and power supplies, crippling vital services such as transport, sanitation and medicine.

In this month's issue of Physics World, Ashley writes: “Without power, people would struggle to fuel their cars at petrol stations, get money from cash dispensers or pay online. Water and sewage systems would be affected too, meaning that health epidemics in urbanized areas would quickly take a grip, with diseases we thought we had left behind centuries ago soon returning.”

Solar storms are caused by violent eruptions on the surface of the Sun and are accompanied by coronal mass ejections (CME). CMEs are the most energetic events in our solar system and involve huge bubbles of plasma and magnetic fields being spewed from the Sun's surface into space.

CMEs are often preceded by a solar flare – a massive release of energy from the Sun in the form of gamma rays, X-rays, protons and electrons.

A solar super-storm occurs when a CME of sufficient magnitude tears into the Earth's surrounding magnetic field and rips it apart. Such an event would induce huge surges of electrical currents in the ground and in overhead transmission lines, causing widespread power outages and severely damaging critical electrical components.

The largest ever solar super-storm on record occurred in 1859 and is known as the Carrington Event, named after the English astronomer Richard Carrington who spotted the preceding solar flare.

This massive CME released about 10^22 kJ of energy – the equivalent to 10 billion Hiroshima bombs exploding at the same time – and hurled around a trillion kilograms of charged particles towards the Earth at speeds of up to 3000 km/s. Its impact on the human population, though, was relatively benign as our electronic infrastructure at the time amounted to no more than about 200 000 km of telegraph lines.

Ashley, who is studying for a PhD in Aerospace Engineering, makes it clear that these types of events are not just a threat, but inevitable. Indeed, NASA scientists have predicted that the Earth is in the path of a Carrington-level event every 150 years on average – which means that we are currently five years overdue – and that the likelihood of one occurring in the next decade is as high as 12 per cent.

The 40-strong international team of scientists from SolarMAX gathered at the International Space University in Strasbourg, France, last year to identify the best ways of limiting the potential damage of a solar super-storm.

A sub-group of scientists concluded that advanced space-weather forecasting is the best solution, which could be achieved by sending an array of 16 lunchbox-sized cube satellites into orbit around the Sun.

This network could give around a week's notice of where, when and with what magnitude solar storms will take place, providing adequate time to switch off vulnerable power lines, re-orientate satellites, ground planes and begin national recovery programmes.

Ashley's own solution is to design spacecraft and satellites so that the sensitive, on-board instruments are better protected again sudden increases in radiation from solar storms. He suggests redistributing the existing internal architecture of a craft so that sensitive payloads are surrounded by non-sensitive bulk material such as polyethylene, aluminium and water.

He added: "As a species, we have never been more vulnerable to the volatile mood of our nearest star, but it is well within our ability, skill and expertise as humans to protect ourselves.”

You can read more about Ashley's findings in The Telegraph and Daily Mail.