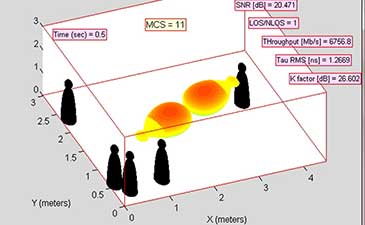 The millimetre-wave band (58-63GHz) is seen as a perfect candidate for short-range gigabit wireless communications.  These networks are envisaged to satisfy the demands of future data-rate hungry applications but few studies have analysed the potential of frequency reuse at 60GHz.

The first paper on gigabit wireless communications could radically enhance the wireless capabilities of future mobile phones and tablets.  The research looked at enhanced technologies and algorithms to increase the data capacity and densification of short range wireless networks. The work showed that polarimetric filtering can enable a higher density of active data links. Each millimetre wave link is capable of supporting user rates of up to 7Gbps, with Bristol’s research showing that four simultaneous links could be active in a single room. These data capacities are 100x better than those achieved with current Wi-Fi technologies.

Djamal Berraki, a PhD student working on the gigabit wireless communications project, has produced a short video to demonstrate the capabilities of the simulator.

The demand for data access by mobile users is doubling every year and is predicted to continue into the foreseeable future.  This is pushing service providers to deploy denser networks. Also, since the frequency bands used by 3G and 4G services are close to their capacity limits, there is considerable interest in the use of millimetre wave frequencies for 5G cellular networks.

The second paper considered beamforming as a solution to provide multi-gigabit connections between the 4G and 5G cellular base stations and the core network. The work also supported direct connections to the users.  Here beamforming is used to focus the communication waveforms onto specific mobile phones and tablets.

At present it is common for the data rates in a cellular network to be limited by the link to the core network (known as backhaul). The research proposed an efficient adaptive beamforming algorithm to extend the range and data rate while also reducing interference. The paper used compressive sensing to significantly reduce the amount of control data needed to adapt the network to temporal and spatial changes in the channel.

Professor Andrew Nix said: “Both research papers represent an important contribution in the quest to address the ever increasing user demand for higher data rates and capacities. We are fast running out of radio spectrum in the lower frequency bands where cellular and Wi-Fi current operation. As a result we need to exploit high frequencies in future products.”

IEEE WCNC is the world premier wireless event for industry professionals, academics and individuals from government agencies and other institutions to exchange information and ideas on the advancement of wireless communications and networking technology.