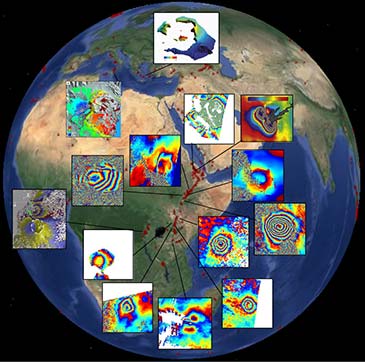 Global perspective: satellites are often the only form of monitoring for remote or inaccessible volcanoes. This view shows some of the recent episodes of deformation seen at volcanoes in Europe and Africa.

Using satellite imagery to monitor which volcanoes are deforming provides statistical evidence of their eruption potential, according to a new study led by the University of Bristol published today in Nature Communications.

ESA’s Sentinel satellite, due for launch on April 3rd, should allow scientists to test this link in greater detail and eventually develop a forecast system for all volcanoes, including those that are remote and inaccessible.

Volcano deformation and, in particular, uplift are often considered to be caused by magma moving or pressurizing underground.  Magma rising towards the surface could be a sign of an imminent eruption.  On the other hand, many other factors influence volcano deformation and, even if magma is rising, it may stop short, rather than erupting.

Dr Juliet Biggs and colleagues in the School of Earth Sciences, with collaborators from Cornell, Oxford and Southern Methodist University, looked at the archive of satellite data covering over 500 volcanoes worldwide, many of which have been systematically observed for over 18 years.  Satellite radar (InSAR) can provide high-resolution maps of deformation, allowing the detection of unrest at many volcanoes that might otherwise go unrecognised.  Such satellite data is often the only source of information for remote or inaccessible volcanoes.

The researchers applied statistical methods more traditionally used for medical diagnostic testing and found that many deforming volcanoes also erupted (46 per cent). Together with the very high proportion of non-deforming volcanoes that did not erupt (94 per cent), these jointly represent a strong indicator of a volcano's long-term eruptive potential.

Dr Biggs said: "The findings suggest that satellite radar is the perfect tool to identify volcanic unrest on a regional or global scale and target ground-based monitoring."

The work was co-funded by the UK Centre for Observation and Modelling of Earthquakes, Volcanoes and Tectonics (COMET) and STREVA, a research consortium aimed at finding ways to reduce the negative consequences of volcanic activity on people and their assets.

"Improving how we anticipate activity using new technology such as this is an important first step in doing better at forecasting and preparing for volcanic eruptions," said STREVA Principal Investigator, Dr Jenni Barclay.

However, many factors and processes, some observable, but others not, influence deformation to a greater or lesser extent.  These include the type of rock that forms the volcano, its tectonic characteristics and the supply rate and storage depth of magma beneath it.  Thus, deformation can have different implications for different types of volcanoes.  For volcanoes with short eruption cycles, the satellite record typically spans episodes that include both deformation and eruption, resulting in a high correlation between the two.  For volcanoes with long eruption cycles, the satellite record tends to capture either deformation or eruption but rarely both.

In the past, radar images of the majority of the world’s volcanoes were only acquired a few times a year, but seismological data indicate that the duration of unrest before an eruption might be as short as only a few days.

Dr Biggs said: "This study demonstrates what can be achieved with global satellite coverage even with limited acquisitions, so we are looking forward to the step-change in data quantity planned for the next generation of satellites."

The European Space Agency is planning to launch its next radar mission, Sentinel-1 in early April.  This mission is designed for global monitoring and will collect images every six to twelve days.  Using this, scientists should be able to test the causal and temporal relationship with deformation on much shorter timescales.

Professor Tim Wright, Director of COMET, added: "This study is particularly exciting because Sentinel-1 will soon give us systematic observations of the ups and downs of every volcano on the planet.  For many places, particularly in developing countries, these data could provide the only warning of an impending eruption."

COMET is the UK Natural Environment Research Council (NERC)'s Centre for the Observation and Modelling of Earthquakes, Volcanoes and Tectonics, based at the Universities of Leeds, Bristol, Oxford, Cambridge, Reading, Newcastle, and UCL.

STREVA is an interdisciplinary project funded by the NERC/ESRC Increasing Resilience to Natural Hazards in Earthquake-prone & Volcanic Regions programme involving the Universities of East Anglia, Bristol, Oxford and Leeds, the British Geological Survey and the Overseas Development Institute.