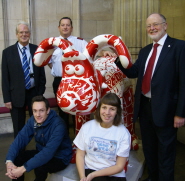 Back, l-r: Dave Skelhorne and Gary Nott, organisers of the Tower Tours, and Professor David Clarke, Deputy Vice-Chancellor of the University of Bristol. Front, l-r: Illustrator Leigh Flurry and Amy Ryder, Community and Events Fundraiser at the Grand Appeal

The Wills Memorial Building has been unveiled as the permanent home for ‘Bark at Ee’, the University of Bristol’s striking Gromit, after 5,655 people cast their vote to decide where the popular pooch should reside. The University bought one of the hugely popular Gromit Unleashed statues at the auction last month and the decision about its new home was placed in the hands of students, staff and alumni.

The University bought one of the hugely popular Gromit Unleashed statues at the auction last month and the decision about its new home was placed in the hands of students, staff and alumni.

Other options included Senate House and the Richmond Building, home to the University of Bristol Students’ Union, but the iconic Wills Memorial Building was favoured by 63 per cent of voters.

‘Bark at Ee’ was designed by illustrator Leigh Flurry, who incorporated Bristol phrases and expressions into the red and white design.

Leigh, who was reunited with his Gromit in Wills Memorial Building to reveal the results of the poll, said: “It's fantastic to see ‘Bark at Ee’ in his native surroundings. I couldn’t be happier that the University helped raise the money for such a great charity, kept the Gromit local, and is housing him at the Wills Memorial Building. I hope ‘Bark at Ee' will attract visitors for many years to come. He certainly puts a smile on people’s faces!”

Tours of the Wills Memorial Building and its famous tower, which sits some 68 metres above Park Street, have raised almost £14,000 for Wallace & Gromit’s Grand Appeal in recent years.

Professor David Clarke, Deputy Vice-Chancellor of the University of Bristol, managed to secure ‘Bark at Ee’ during a tense and competitive auction which raised £2.3million in total for Wallace & Gromit’s Grand Appeal to help support sick children and their families at Bristol Children’s Hospital.

Professor Clarke said: “We were keen that our Gromit should remain somewhere central where he could be admired by the public as well as staff and students, so we’re really pleased that the Wills Memorial Building was a popular choice given its location and existing links with the charity.”

“These wonderful Gromit statues really captured the imagination of people around the world. They now feel part of Bristol’s history and the University is proud to be part of this and ensure ‘Bark at Ee’ remains in the city for people to enjoy.”

The 5ft tall Gromit Unleashed sculptures were designed by famous artists, designers, celebrities and prominent local artists. A total of 80 were placed around Bristol for 10 weeks over the summer, attracting 1.18 million people and directly contributing more than £77 million to the city’s economy.

Amy Ryder, Community and Events Fundraiser at the Grand Appeal, said: “We are thrilled that the students, staff and alumni of the University of Bristol have voted to keep ‘Bark at Ee’ where he can continue to be visited by the communities of Bristol. This is particularly apt as the Wills Memorial Tower Tours have raised over £10,000 for Wallace & Gromit’s Grand Appeal, and now Gromit will be on hand to help out with the fundraising!

“Bristol University’s contribution at auction helped us reach our incredible £2.3 million total, and we are so grateful to the University for its kind and continued investment in Bristol Children’s Hospital.”

We received some great suggestions and would like to thank everyone for taking part.

About the Tower Tours

The Tower Tours allow the public to see behind the grand façade of the Wills Memorial Building and experience the splendour of the Great Hall, Council Chamber and ornate libraries. The view from the top of Wills Tower, some 68 metres above Park Street, is unparalleled and tour guides give a unique insight into the history of the building, which was opened by King George V and Queen Mary in 1925 before being badly damaged during the Blitz in 1940.

Tours take place on the first Wednesday and Saturday of the month. For further information and to book, please see the Tower Tours webpage.

About the Grand Appeal

Founded in 1995, the Appeal has raised over £21million towards the first purpose built children’s hospital in the UK and continues to support the hospital by funding pioneering medical care and equipment, arts, music and play programmes and accommodation for the sickest children and their families.

Bristol Children’s Hospital is one of the UK’s leading Children’s Hospitals and treats young patients from across the South West and South Wales regions with life-threatening illnesses and serves as the paediatric intensive care centre for the whole region. The hospital is the regions specialist centre for a range of services including cardiac and renal treatment, complex surgeries and Bone Marrow Transplants, treating over 100,000 patients every year.