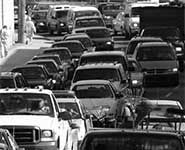 New research led by the University of Bristol has found traffic jams and accidents could be reduced by controlling the reaction times of robotic cars.

The study, led by Dr Róbert Szalai at the University of Bristol, is published in Physical Review E.

The researchers have developed a mathematical technique that allows the calculation as to whether there is a chance a traffic jam will happen from a uniform flow of traffic.

Dr Róbert Szalai, Lecturer in the Department of Engineering Mathematics, said: “The analytical nature of our research means it could be used to understand all sort of systems, such as to design driverless cars that could work well in a mixed human-robotic environment or control gene regulation in living organisms, for example suppress the expression of some harmful gene.”

City traffic is made up of cars that are similar but not identical.  Computer driven cars are also similar, but they can react faster and through wireless communication observe traffic not just in front of them.

Current understanding of traffic is somewhat limited to identical cars, so to advance technology and design safe robotic drivers the researchers needed to understand models including non-identical participants.

The study has found that by using the design tool and controlling the reaction times of robotic cars this can reduce the possibility of traffic jams and accidents.

The researchers hope to develop in the future more realistic car-following models and connectivity structures.  It is hoped that by using similar mathematical equations the research can be used to understand of all sorts of systems from robotic/human cars in traffic, gene regulatory networks and neural networks that could explain epileptic seizures.