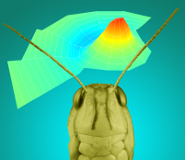 The shape of the nanoscale wave on a locust's eardrum 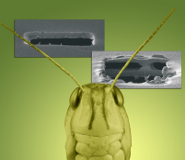 A locust with ion beam milling showing a section of eardrum

The remarkable mechanism by which the tiny ears of locusts can hear and distinguish between different tones has been discovered by researchers from the University of Bristol. Understanding how the nanoscale features of the insect eardrum mechanically process sound could open up practical possibilities for the fabrication of embedded signal processing in extremely small microphones.

Unlike a microphone membrane, the eardrum of the locust is a complicated structure which is used to process the information contained in an incoming sound.  In order to survive, the locust needs to be able to distinguish between the friendly sounds of fellow locusts in its swarm and the sounds of a hunting bat approaching.  These sounds differ in their tonal composition: locust sounds are raspy and noisy while bat echolocation calls have distinctly higher frequencies.

Using a set of laser beams shining on the locust, Dr Rob Malkin of Bristol’s School of Biological Sciences and colleagues were able to observe the effects of incoming sound waves on the eardrum.  They found that the locust eardrum behaved in a most unusual way, quite unlike a microphone membrane or the eardrums of other animals.

The researchers first confirmed a result the Bristol team observed a few years ago, namely that the eardrum generates concentric waves of vibrations that shoal in a tsunami-like fashion as they travel from one side of the membrane to the other.  The new, detailed analysis shows that eardrum waves caused by low frequency sounds travel completely across the membrane, where low-frequency-sensitive nerve cells attach to the membrane.  Remarkably, high frequency waves travel only half that far, and stop at the attachment point of high frequency neurons.

Using data and computer modelling, Dr Malkin, an aerospace engineer working in bio-inspired sensor research, quantified this mechanical behaviour.  He said: “It rapidly became evident that the distribution of the vibrational energy was odd…quite unlike what normal materials do when waves travel through them.”

The researchers then discovered a surprising effect: the energy density contained in the travelling wave was amplified as the wave travelled across the eardrum.  The team measured that, as the high frequency waves converge onto one point, the amplification can be as high as 56,000 times.  This energy localisation is remarkable because it is purely mechanical; at this stage only cleverly arranged material within the eardrum membrane does the job.

To understand how this effect is possible in such a small structure, the team used a combination of mathematical modelling with nanoscale measurements and structural visualisation.  They employed a focussed ion beam at Bristol’s Interface Analysis Centre to gain knowledge of the structural features of the locust’s eardrum then fed this information into analytical models in order to unveil the contributions of different eardrum attributes.  Thus, they established that a particular combination of attributes generates the phenomenon; geometry, tension, stiffness and mass distribution all turn the locust eardrum into a little mechanical processing device.

Professor Daniel Robert, who led the research team and is funded by the Royal Society, said: “Other animals, including mammals such as ourselves, analyse tonal differences using very refined mechanisms in the cochlea.  Hearing in these animals is a three-step process, from capturing sound with an eardrum to amplifying vibrations through middle ear bones and then transmitting them to the cochlear frequency analyser.  Locusts do not enjoy the luxury of such a complicated, large and biologically expensive to build apparatus.  Instead their ears evolved to be much simpler with sound capture, local amplification and frequency analysis all taking place within one structure.”

Dr Malkin added: “This is a feat of miniaturisation and simplification; we now need to make a similar sensor and test it.”

The research, funded by the BBSRC, is published today [6 November] in Journal of the Royal Society Interface.