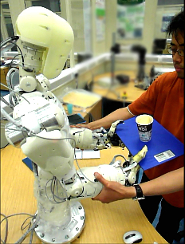 Robots are being designed to help with daily activities

The interaction between humans and robots and the integration of robots into our society will be discussed when world-leading experts come to Bristol for an International Conference on Social Robotics.

Over 100 delegates from around the world, including researchers from MIT, Imperial College and the University of Tokyo, will report on the latest progress in social robotics and will particularly focus on ‘companionship’.

Over 55 papers will be presented at the conference, and researchers will explore subjects such as:

Dr Guido Herrmann, Reader in Control and Dynamics in the Department of Mechanical Engineering at the University of Bristol and chair of the conference, said: “The Bristol Robotics Laboratory is a world leader in modern advanced robotics.

“Tremendous progress has been made in the development of robots capable of interacting with humans in the last decade, and this conference will bring together world-class robotics experts whose aim is to bring social robots a step closer into our world.”

The winners of the Robot Design competition and NAO Programming competition will be announced during the conference.

The Robot Design competition, jointly run by the Bristol Robotics Laboratory and the Pervasive Media Studio, centres on the theme of ‘companionship’ in social robotics. The judges will be looking for entries for creating future robots that people will want to spend time with in a social sense, and the benefits that such robots may give to society or individuals.

Ten entries have been selected to present their submission at the conference during an interactive session.  Following their presentation, conference attendees will vote for the top three entries, all of whom will receive certificates and prizes provided IET Robotics & MechatronIcs TPN.  The winner will receive £400, the runner-up £200 and there is a third prize of £100.

The NAO Programming competition has called for people to design a program for Aldebaran Robotics NAO, a 58cm tall humanoid robot platform that can entertain a human companion.

Two submissions have been selected to be presented at the conference during an interactive session.  The selected entrants will also be invited to download their software onto a real NAO during the conference, and conference attendees will have an opportunity to try out the behaviours designed by the competitors and judge how entertaining they are. Conference attendees will then vote for the most entertaining entry. The best entry selected by the judging panel, and the entry voted as the most entertaining by attendees, will both receive certificates and a Boe Bot Robot Kit from Active Robotics.

About the Bristol Robotics Laboratory (BRL)

The BRL is a collaborative research partnership between the University of Bristol and UWE Bristol (the University of the West of England). It carries out cutting edge research programmes focused on the development of autonomous robot systems. The BRL’s vision is to transform robotics by pioneering advances in autonomous robot systems through the elucidation of the underpinning mechanisms required to create robot systems, which behave intelligently without human supervision.

The BRL also has strong links with the emerging advanced robotics manufacturing community, and also has regular contact with larger international organisations that have a robotics interest.

About The Pervasive Media Studio

We are a multi-disciplinary lab exploring and producing pervasive media content, applications and services. We work within a brilliant community of artists, creative companies, technologists and academics, including UWE's Digital Cultures Research Centre.

Our projects include gaming, projections, location-based media, digital displays and new forms of performance. Some are commercial, some are cultural. We test our projects as early as possible and iterate.